Located across the bridge from Canada’s national capital is Ottawa’s unofficial sister city, Gatineau. With close borders between the provinces of Ontario and Quebec, the capital region known as Ottawa-Gatineau has long since been connected through tourism, commerce and education.

While the two provinces are similar, they also differ in many ways. One such way is that of their education system. As the only province in Canada to offer a CEGEP program, the opportunity offered to those exiting high school is truly unique.

As a publicly funded post-secondary and pre-university technical college, Quebec is the only place in Canada you can find it. Roughly translated into English, the acronym refers to general and vocational college but has become a term or word in itself over time. 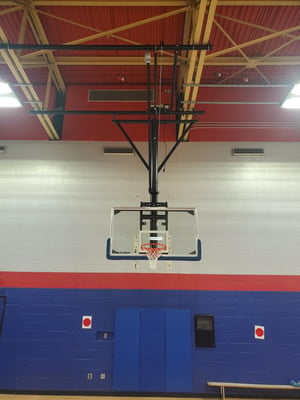 Used to fill an important gap between high school and college or university, the two-year programs offered through CEGEPs often lead to further post-secondary education or directly into the workforce.

As part of a recent project, we were invited to design, supply and install some new basketball systems for one of the largest CEGEP institutions in the region. Located in Gatineau, Cégep de L’Outaouais consists of two main sister campuses and a smaller third campus.

We were approached when the college became interested in performing some upgrades to their gymnasium and was in search of a basketball system that would be professional in nature and have the ability to be moved out of the way for non-basketball events. 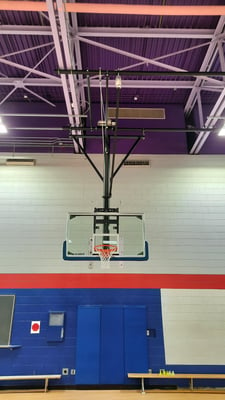 What was ultimately chosen was our front-folding ceiling-suspended basketball units. Designed to be hung from the rafters in the ceiling of the gymnasium, these systems are also electrically operated, allowing operators too quickly and safely move them out of the way when not in use.

To give the systems an even more professional look and feel, the college opted to outfit the backstops with state-of-the-art glass backboards and breakaway rims.

Following the installation, the upgrades were hard to miss. Today the gymnasium looks and feels like a professional court and is ready to serve up CEGEP hoops to students for years to come.