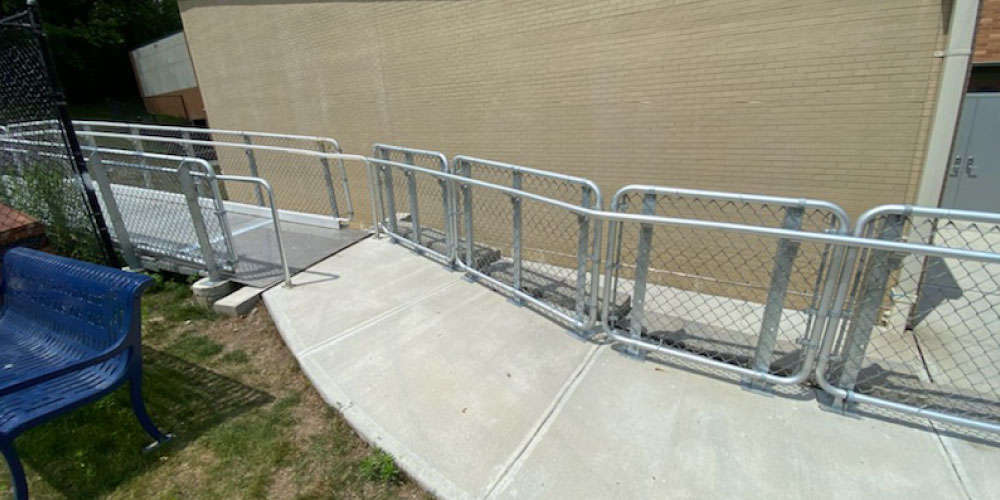 Sports play a significant role in the lives of many students ranging from elementary school through high school. While encouraging coaches, new uniforms and exceptional facilities contribute towards the positive experiences of players, the support of family and friends is what ultimately makes or breaks their time on the field or court. Understanding the importance of family and friend involvement during athletic events, a school in Blind Brook, New York reached out to Sports Systems and requested help in better accommodating their visitors. 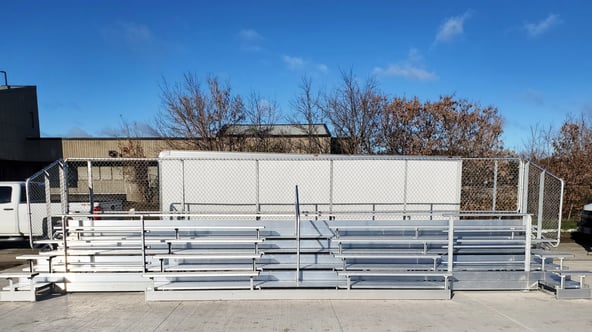 Intentional planning plays an important role in our everyday lives. While spontaneity can be exciting, planning ahead helps us be ready for a myriad of situations and can lead to a more sustainable way of living. From meal preparation to time management, thinking ahead helps maintain healthy and efficient lives. Proper planning can also eliminate the unintentional exclusion of others. Anticipating the needs and potential limitations of visitors, York Stadium Park has taken action in creating a more inclusive outdoor environment for their spectators. 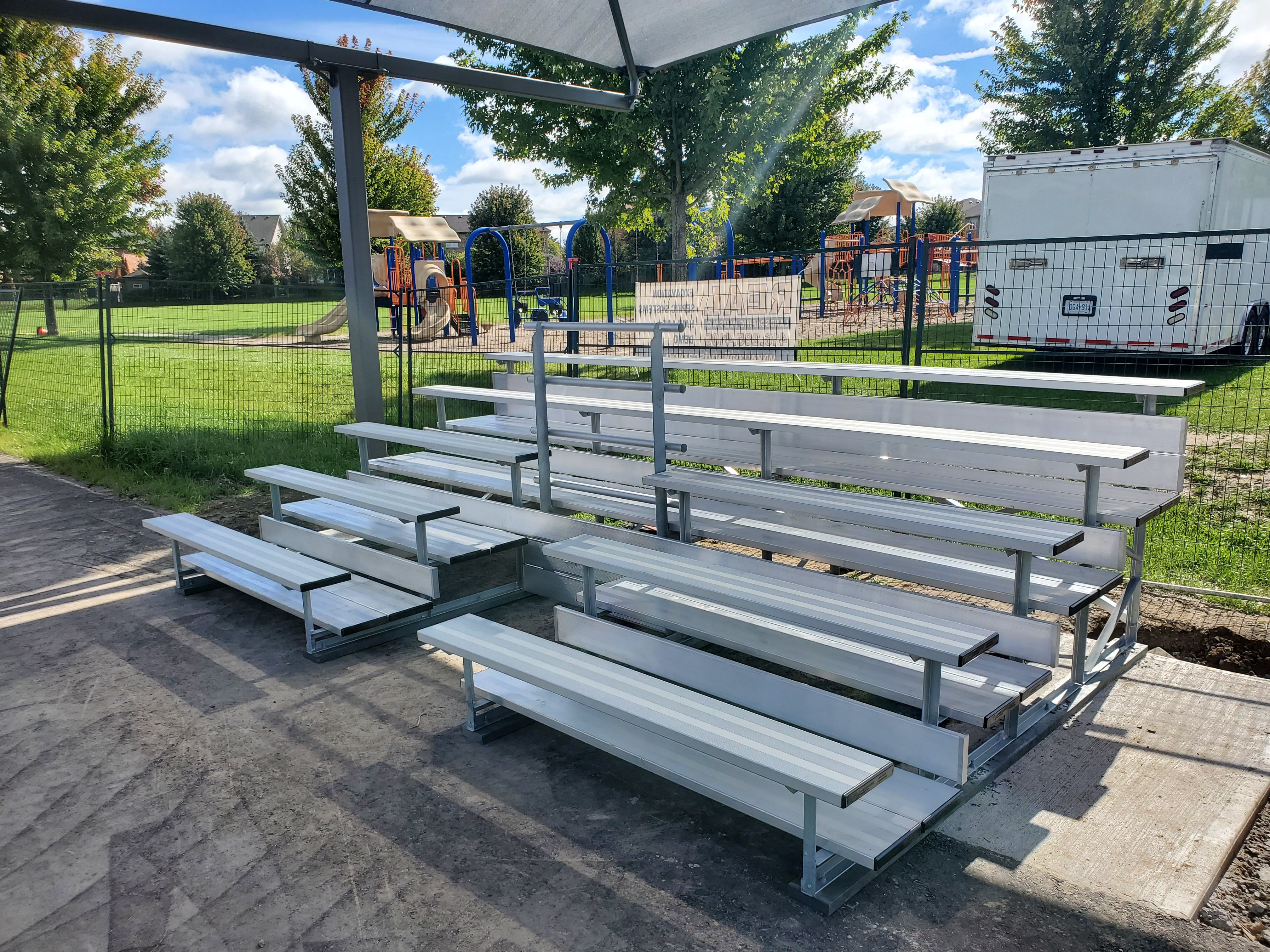 Growing up, many of us took our local parks for granted. In parks with playgrounds for example, the biggest concerns for many children were splinters, bee stings, and the static electricity produced by going down a slide. There was minimal thought to accessibility, and these parks were embraced for providing a free activity for families. However, it has become increasingly evident that not every community has had the same accessibility to and experience with local parks. 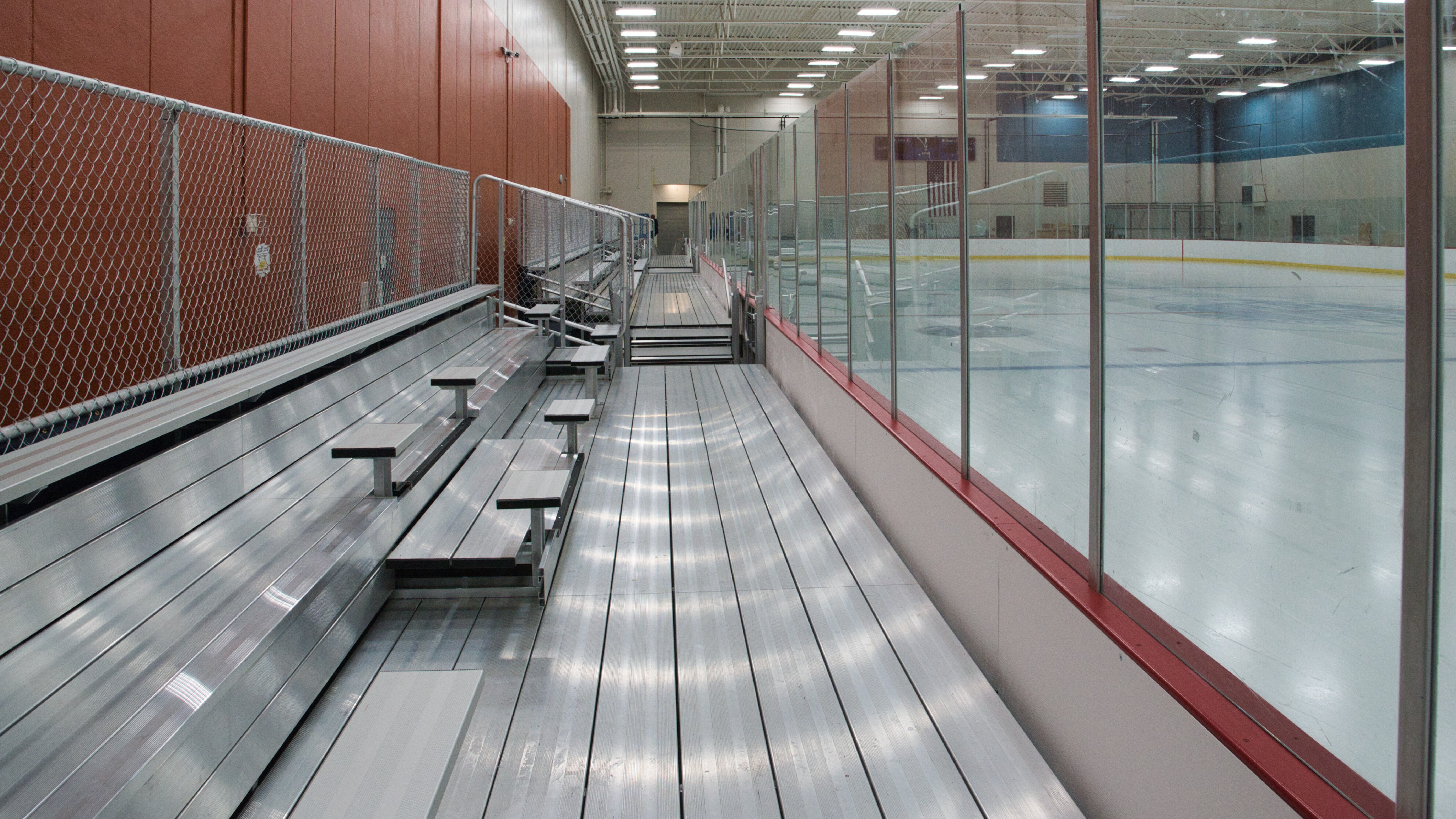 Named one of the best places to live in the United States by Money Magazine in 2008, St. Peters,
Missouri continues to top their list as a wonderful place to live with a reasonable commute to St. Louis.

As what is heralded by many as the crown jewel of St. Peters, we were recently brought in to aid in the design and installation of new arena bleachers for the St. Peters Rec-Plex.

The Continued Evolution of DC West The midwestern region of the United States is often associated with open land, hearty meals, unique accents, and friendly, hard-working people. When it comes to education, however, the school systems in these states have historically been regarded as mediocre. Disproving this assumption, however, are the schools found in Valley, Nebraska. 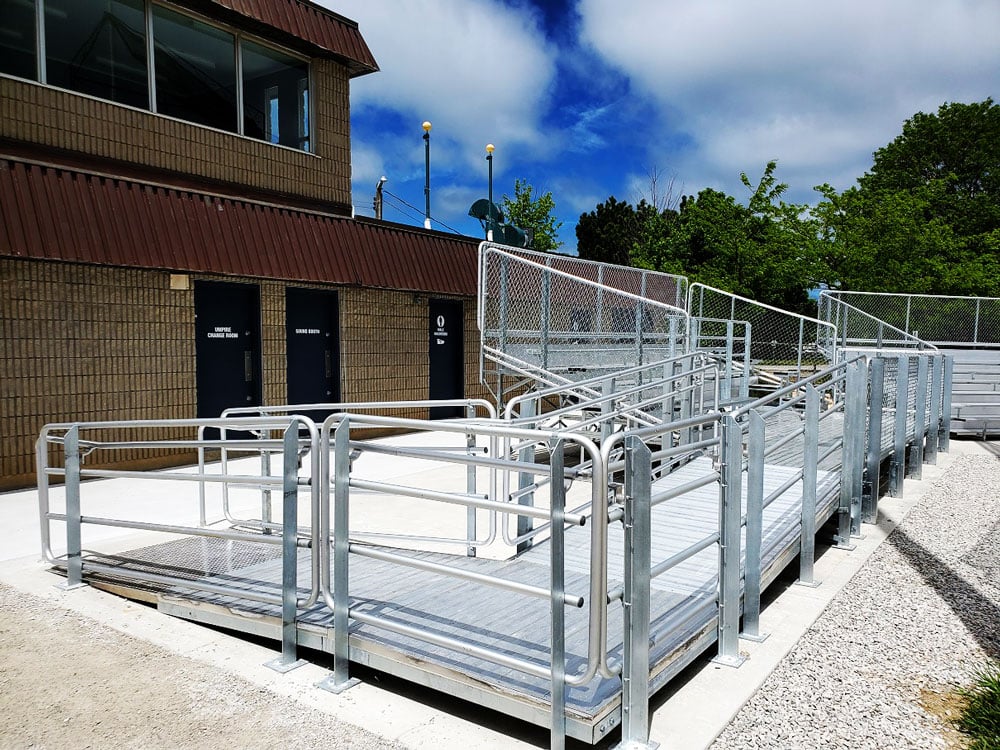 Aluminum Bleachers Remain a Top Priority for Colleges and Universities 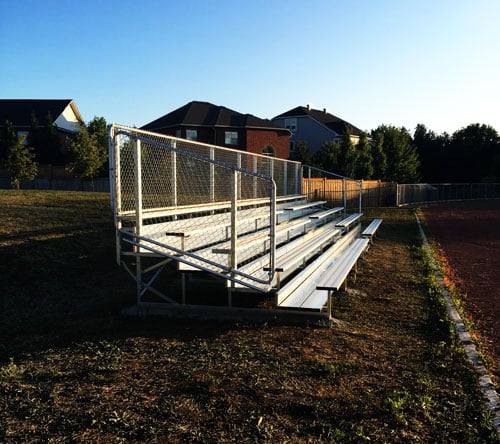 When it comes to planned expenditures, our friends over at Recreation Management Magazine conduct annual research that is helpful in more ways than one. Their annual report takes a deep dive into annual trends for spending with regards to colleges and universities across the United States.

While the 2019 edition of their annual survey indicated little to no changes with regards to planned features and upgrades, there was certainly some movement up the ranks for certain products such as bleachers and seating.

While planning for the development of synthetic turf sports fields remains at the top of the list for the second consecutive year, bleachers and seating took honours in the third spot for the most planned additions to colleges and universities. Jumping up from sixth position in late 2018, it is no secret that the building boon for planned seating will continue through 2020.

Located in southwestern Ontario, one of our most recent projects lead us to beautiful Essex County, Ontario. Stretching south along the banks of Lake Erie, the area is known for its wonderful beaches and small-town flair.

The project was brought to us by the Greater Essex County District School Board as they were interested in creating a custom grandstand bleacher for the Essex District High School located in the northwest corner of the City of Essex. Founded in 1885, the high school serves as the oldest operating publicly funded secondary school in the entire province of Ontario and currently serves roughly 1,000 students in the area.

Looking to add to the sidelines of the school’s athletic field, the idea to design and build a custom 10-tier grandstand was brought to our team earlier this year. In addition to the seating and ensuring the bleacher was completely accessible, our team was also mandated with coordinating, furnishing and closing off the building permit as well as procuring all inspectors necessary for the school to obtain occupancy from the municipal building authority. 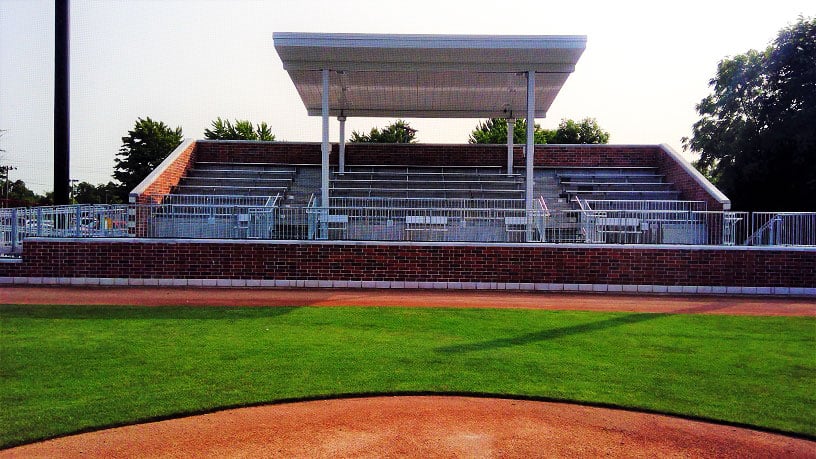 In what is often referred to as Sarnia’s premier baseball park is also its oldest. Dating back to the 1950s, the baseball diamond has long served the community as a hub for local baseball serving as a home diamond for the Sarnia Braves as well as other local teams.

Following the completion of a new set of dugouts built in 2014, plans were set in motion to complete the redesign in the years following. With plans set to build around the new dugouts, demolition on the site began in 2017, with the rebuild slated for 2018.

The existing 600-seat bleachers were in disrepair, so included in the rebuilding operation was a new grandstand seating system complete with customized accessibility ramps, viewing platforms and more. Change rooms, a new concession area, netting barrier, landscape design and baseball field backstop were all also part of the scope of work for the historic athletic field. 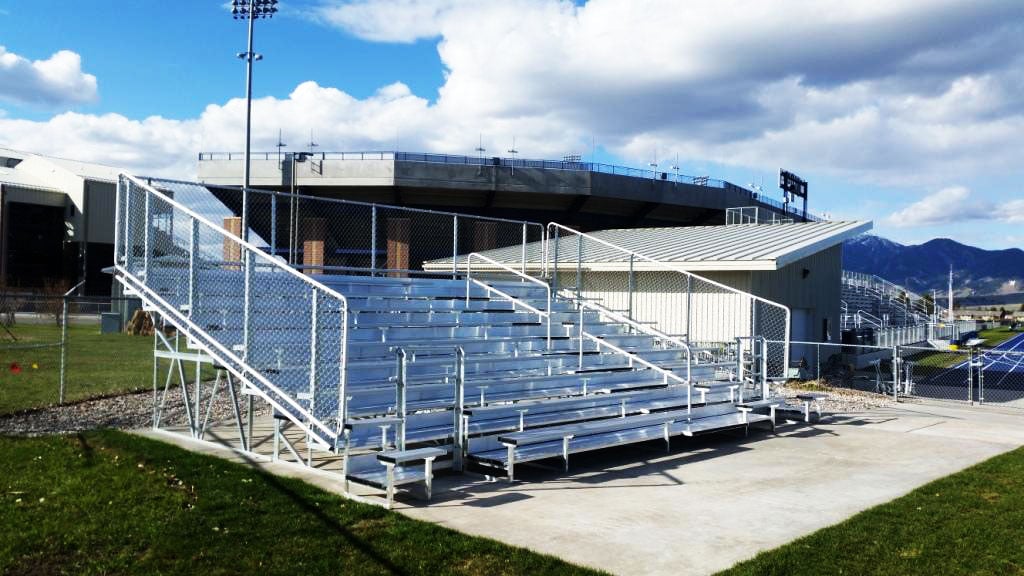 With enrolment of roughly 17,000 students, MSU offers baccalaureate degrees in 51 fields, master’s degrees in 41 fields and doctoral degrees in 18 fields spread across its nine colleges. Over the past decade, the school has enjoyed monumental growth in both enrolment with major construction and renovation projects including a new Animal Bioscience Building and a major renovation to Gaines Hall.