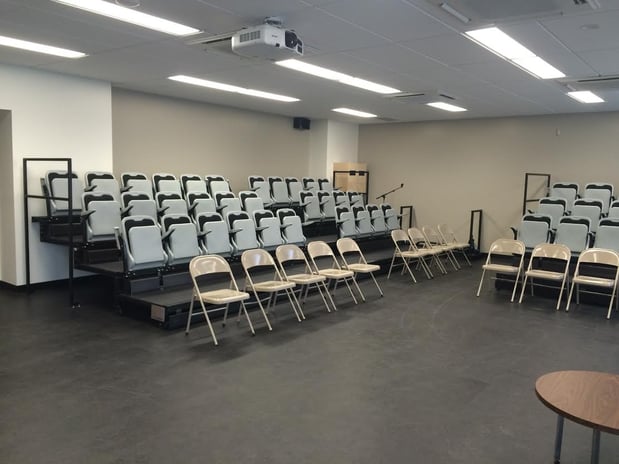 A project nearly a year in the making came to fruition this fall as our team was busy designing a set of seating banks that were quite different than most.  In December of 2015, we were approached by Sublime Architecture who had a client in need of a very unique and customized retractable bleacher product.

Naturally, our team took the task at hand and quickly got to work with both the architecture firm and the end user.  The product was to be installed and utilized at Cégep Garneau, a public academic institution located in Quebec City.  Currently speaking, approximately 6,000 students call Cégep Garneau home as they embark on a two-year study program that is in place to better help students in the province of Quebec prepare for post-secondary education.

As with many of our customers, Cégep Garneau was interested in four of our telescopic bleacher systems, but instead of being secured to a wall, they needed their system to be completely independent, giving them the ability to move the bleachers where and when they saw fit. 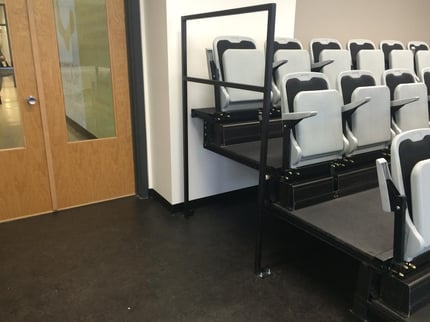 After exploring the proposed seating capacity and expected sizing of the unit, it was decided that our model 3200 telescopic bleacher system was the perfect match.  Our design team then got to work on creating a realistic representation of each of the bleacher banks for review by key stakeholders in the project.

During the spring of 2016, after receiving detailed proposed designs, the order was approved and sent into production.   In addition to the bleachers themselves, the facility opted for a total of 93 foldable chairs to be installed across the four units and in keeping the colour coordination simple and clean, they opted for custom colours of grey and black for the seat and back cushions and the framing of the structures.

Our installation partners at Constructions et installations sportives, headed up by Joel Villeneuve, took care of everything on the ground in Quebec City with extreme precision in late October of this year.