A Custom Netting Barrier for the University of Ottawa

The University of Ottawa is the largest English-French bilingual university on the planet, comprising over 100 acres of beautiful real estate in Canada’s capital. Originally established as the College of Bytown in 1848, the university has grown to become one of the country’s most respected educational institutions.

Donning the garnet and grey, the Ottawa Gee-Gees and their respected athletic program consistently provide a high level of competition and play. With 29 varsity teams to its credit including a fiercely respected football team, the University of Ottawa has the athletic prowess to match its academic prominence.

Up until 2013, the Gee-Gees football team did not have a home field on campus, instead using outside locations such as the Varsity Oval (1881-1953), Landsdowne Park (1954-2011), and Beckwith Park (2012), before construction was completed on Gee-Gees Field in 2013. Situated along the 417 highway which cuts directly through the city of Ottawa, the new stadium provides the team with excellent exposure. We were fortunate to have been awarded the contract to design and build the grandstands that are located in the new stadium as well.

As part of one of our most recent projects, we were called back to Gee-Gees Field, this time to provide a completely custom netting barrier. As a true multi-use facility, the field is currently being used for cross-direction 7-on-7 soccer play. As such, stakeholders at the university’s athletic program had grown concerned with the risk of balls leaving the field and possibly entering the busy roadway adjacent to the stadium.

Given the sheer size of the stadium, this netting barrier was no small installation. Spanning over 300 feet in length, our team proudly designed and customized the large steel posts and baseplates needed for the structure in our fabrication facility. 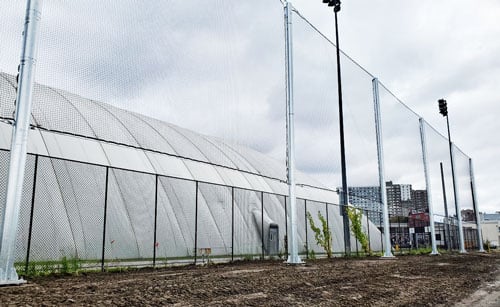 Following the production phase, the posts were sent out for galvanizing ahead of the installation. Once this stage was completed, the poles were delivered directly to the stadium and were met on-site by our experienced installation team. As each post was safely installed around the perimeter, our team got to work hanging the expansive netting barrier across each of the massive poles.

Today what exists along the edge of the stadium is a true state-of-the-art barrier that not only enhances athletic programming at the university but also provides an added level of safety to spectators, pedestrians and athletes alike.