A Custom Netting Solution for the 2015 Pan Am Games

November 6th of this year marks five years since the great city of Toronto was awarded the 2015 PAN AM & PARAPAN Games, giving the province of Ontario its first international multi-sport event since 1930.

When the games come to Toronto next summer, it will mark only the third time this event has been held on Canadian soil, with Winnipeg, Manitoba being the only other host city in the country. Both the Pan Am & Parapan Games are held every four years, always preceding the Olympic and Paralympic Summer Games.

With the start of the 2015 games approaching in less than a year, the organizing committee, project managers and volunteers are busy preparing sites in and around the Greater Toronto Area, anxiously awaiting the start of the games, set to kickoff on July 10th, 2015.

As part of the development of multiple sites across Toronto, Sport Systems’ expertise was called upon to design, build and install a custom, retractable barrier netting solution to serve as a barrier around the perimeter of the Field Hockey venue located on the campus of the University of Toronto.

The project was to be unique, for a variety of reasons. In addition to working closely with key stakeholders, we also included members from the University of Toronto, as this netting solution was not only to be used solely for the Pan Am Games, but was to then be handed over to the university after the completion of the games for its continued use. 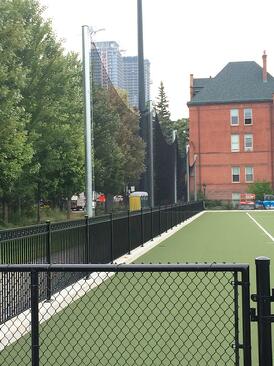 The custom netting barrier was to be designed containing four separate sections, one in each end zone of the side-by-side fields. Each section of netting was designed on a cable and pulley system, allowing for each portion of netting to be easily lowered or raised as needed. Adding to its versatility, we also had this netting designed so that each section could be disassembled and stored when not in use, particularly during the harsh winter months, avoiding unneeded wear and tear while the netting barrier is not in use. Erecting each netting section are our custom designed and welded, galvanized steel posts, securely installed into ground sleeves, further adding to the versatility of the project.

"We are so pleased with Sport Systems Canada’s performance on this project – I can’t thank you and your team enough...the event went off without a hitch.”

This project came under a fairly strict timeline, as the Planning Committee was preparing for its first test events to be held at the location. Once again, our team designed, built and had this project installed and completed in a timely fashion, allowing for the inaugural test events to go off without a hitch.