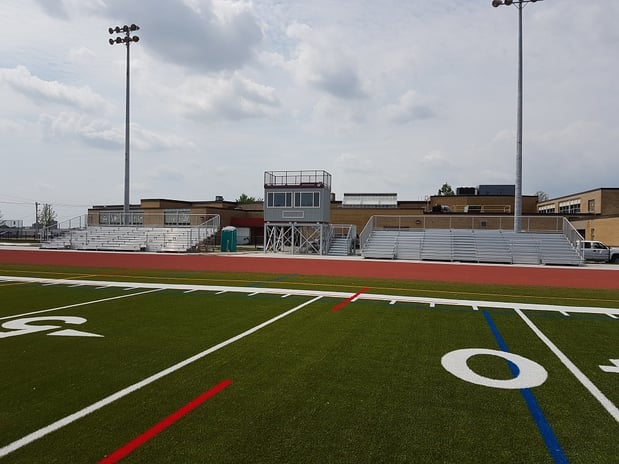 One of our most recent projects brought us to beautiful Brantford, Ontario, a city home to some very famous former residents.  Often referred to as ‘telephone city’, Brantford is home to the telephone’s inventor Alexander Graham Bell who invented the popular device at what is now known as the Bell Homestead National Historic Site.  It is believed that the first long-distance telephone call, from Brantford to Paris, was conducted in this location back in 1876.

Brantford is also made ‘great’ as the home of one of hockey’s all-time best players, Wayne Gretzky.  The “great one” was born and raised on his backyard rink in Brantford and he continues to be an integral part of the community to this day.

We were contracted to take on a three-pronged project for the city that included the engineering of foundation designs, fully accessible bleacher structures and a stand-alone press box for Pauline Johnson Collegiate.

The city was in search of a turnkey product that could be developed literally from the ground up and as such, our team undertook the foundation designs as well utilizing the soil reports provided by the contractor.

After the foundation was complete, we began the strategic installation of a pair of 10-tier 43’ long angle-frame aluminum bleachers, complete with support structure and staircase access.  Each bleacher was designed around the Ontario Building Code and AODA requirements for accessibility. In total, the bleachers can accommodate 238 people in the typical bench seating sections and was designed with grade-level accessible notch-outs to seat four wheelchairs.

The final piece of this project was the stand-alone press box which was to be located between the two banks of previously installed bleachers.  The press box comprised of a 8’ x 16’ wood-framed building complete with scorer’s counters, baseboard heaters, 100 amp electrical panel, two large 7’ wide windows and rooftop filming access via roof hatch and internal ships ladder. 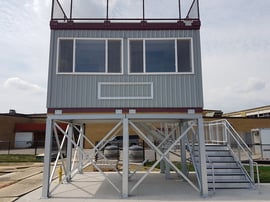 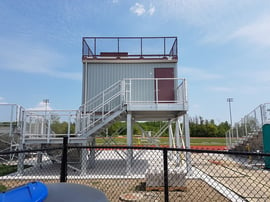 The rooftop area is equipped with GFI receptacles, allowing for camera equipment to be used on the roof, along with a full perimeter guard rail. The support structure was designed using wide flange steel beams for a clean structural look and hot dipped galvanized after fabrication.   The goal in the design of the press box was to elevate the floor of the building to 8’ above field level and was completed with platform and staircase access, allowing for easy access from the ground level.