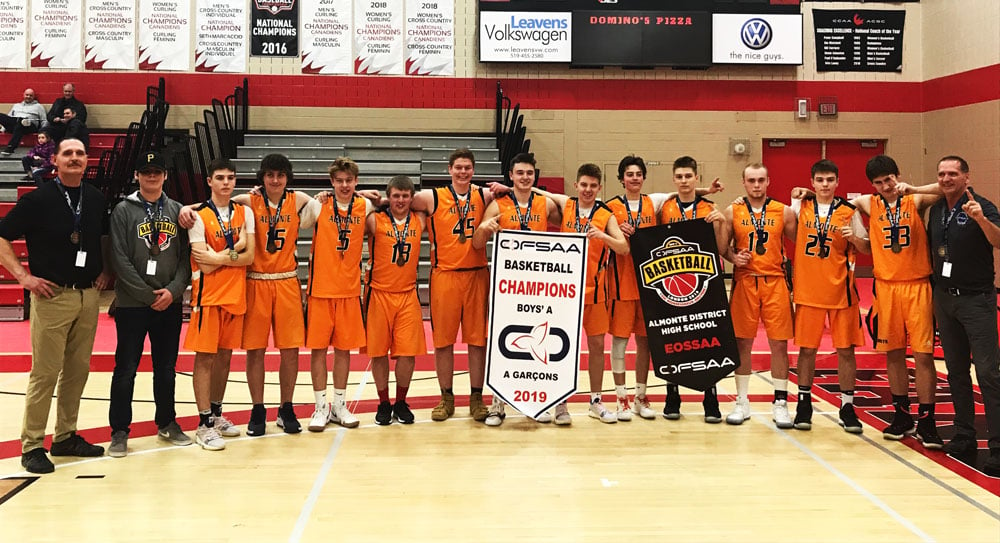 Leading up to this year’s basketball championships, our hometown team from Almonte District High School hit a small snag in their fundraising efforts and approached our team for support.

Having supported the team in the past, we gladly did what we could to make the trip to London’s Fanshawe College happen for the boys’ team. With support from our local community and from other organizations, the boys were on their way last week as the 3rd-ranked team in the provincial tournament.

After flying out of the gates with a quick 64-53 win to open the tournament on Monday over the 17th ranked team, the boys had their work cut out for them for the remainder of the tournament.

With a double-header on Tuesday, the boys’ basketball team handled it like true professionals, first beating 14th ranked Gravenhurst with a 65-47 win then moving on to the 9th ranked team where our team was able to put 75 points on the board in a convincing win.

The final day of the tournament is where champions are forged and the boys were well on their way, winning their first game in their traditional fashion by 16 points. The path to the gold medal was clear as day as the boys were slated to tip off against 11th ranked Notre Dame High School. In what was arguably the best game of the tournament, the finish was as dramatic as the boys’ path that led them to London. In the final minutes, the team was able to mount a comeback and finish out the clock with a three-point win over Notre Dame.

We want to congratulate the team once again on their impressive performance on the provincial stage and to all the coaches and volunteers that made this amazing trip take place!