Field Hockey Netting for the 2015 Pan Am Games 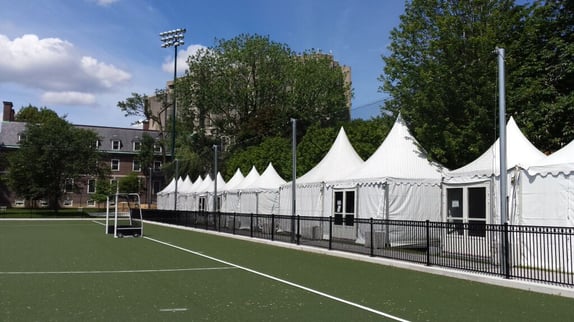 The 2015 Pan Am Games kicked off last week with great success on July 10, 2015. Three days into this fierce international competition, the host country, Canada is atop the medal count, closely followed by our neighbours to the south, the United States of America.

Having only been played on Canadian soil twice before, the return of the Pan Am Games offers sports fans a great glimpse into international sporting competition as the Games play host to 41 member nations competing in over 36 Pan Am sports.

In the fall of 2014 we began to install barrier netting at multiple sites on campus at the University of Toronto for test events leading up to the kickoff of the games this summer. Our team recently returned to Toronto, adding netting barriers to the grass playing fields at the University.

These fields have been transformed over this entire planning process into premier field hockey pitches, ready to serve one of the most popular sports of the Pan Am Games. The fields consist of two international Global Class 1 water-based turf fields, one serving as a warm-up pitch and the other for use in competition. These fields are irrigated before, during and after field hockey games and both fall under the strict standards of the International Hockey Federation.

Before the games took place, our team manufactured and installed the final barrier netting required at the facility. The netting barriers are retractable in nature, giving the facility a great deal of versatility for future use. Upon the completion of the 2015 Pan Am Games, this product is to remain on-site atthe University of Toronto, adding to the existing facilities on campus and will continue to host of variety of sporting events at the field.