When choosing a tennis net for any outdoor court or facility, the considerations of the geographical location and associated weather come into play and as such, there are a number of factors to consider when choosing a new tennis netting system.

Tennis netting is made to be strung quite tight when installed on posts and as such is rated in a number of different ways. One such measurement is by its break strength. This measurement, in its simplest form, means how much tension a strand can endure before “necking”. Necking is simply when the material’s cross section begins to bend significantly.

While our tennis netting varies, most of it falls between 3 – 3.5mm in width and comes with a break strength of either 285 or 325 for our more heavy-duty options.

Given the location of the headband (on the top of the net), it can often be the first component of the netting to deteriorate. These bands are used to secure the netting but are often subject to abuse from balls that barely made it over the net and the elements.

These are typically available in two different varieties; polyester and vinyl-coated polyester. They are also available in different levels of thickness or ply, ranging from one-ply to three-ply.

When it comes to durability, choosing a tennis net with a two-ply or higher headband coated in vinyl is the best choice, while slightly higher in price, they will not be subject to replacement as much as their polyester counterparts. 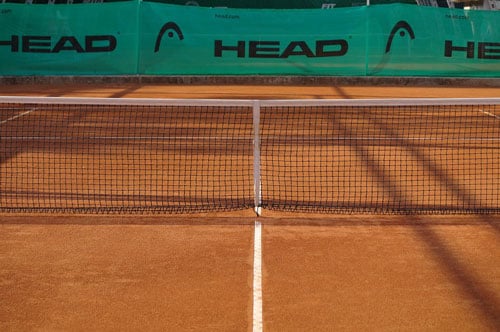 How the net is centered and secured is also of vital importance. We carry a variety of adjustable center straps that ensure your netting remains in place. Depending on the configuration of your tennis court, you might also be able to utilize a galvanized center anchor, which is placed inside a ground sleeve to secure the center of the netting.