Keep Pace with Our Line of Basketball Shot Clocks

In an effort to bring more excitement to the game of basketball in the 1940’s and 1950’s, the National Basketball Association (NBA) introduced a shot clock in 1954.  Prior to the shot clock’s inception, the league had various problems attracting fans; perhaps the biggest being low-scoring games with far too many fouls.  These rules crippled the game with bored fans in the stands.

In an effort to revitalize the game, the team in possession was given 24 seconds to attempt a shot or lose possession of the ball. The league also added a rule limiting the number of fouls in a quarter;  both changes complimenting the shot clock perfectly.  Each foul outside of the allowable limit became a shooting foul, permanently changing the game for the better.

These changes did, however, take some time before they began to filter down to lower levels of play such as at the collegiate level.  It wasn’t until the 1985-86 season that the National Collegiate Athletic Association (NCAA) implemented a 45 second shot clock into men’s competition.  Over time, changes have continued to decrease the length of the shot clock, changing to 35 seconds in the 1993-94 season and to the most recent change in the 2015-16 season where the shot clock now sits at 30 seconds.

Despite these changes there are still a number of governing bodies that oversee high school athletics that have yet to adopt the shot clock regulations that have made the game so popular on the professional and collegiate levels.  Many high schools in Canada and the United States still follow the guidelines set out by the National Federation of State High School Associations (NFHS), which do not require the use of shot clocks for basketball competition.

These guidelines have come under a great deal of scrutiny lately as more and more athletic directors, teachers and competitors want to see the high school game adapt to the rules of the higher levels of play.

Last year in the province of Ontario, the Ontario Federation of School Athletic Associations (OFSAA) decided to transition away from NFHS rules and adopt FIBA playing regulations, including the implementation of 35 second shot clocks.

With this in mind, as well as the transition of many schools in the United States, we have bolstered our selection of basketballshot clocks for those schools transitioning with the changes.

This pair of shot clocks offers customers a reliable option when selecting a shot clock for their gymnasium.  These clocks are rated for 100,000 hours of continual usage and require no maintenance as their bulbs never need to be replaced.  These clocks can be programmed for any time between 0 and 99 seconds and are housed in a 22-gauge steel casing for the ultimate in protection and durability. 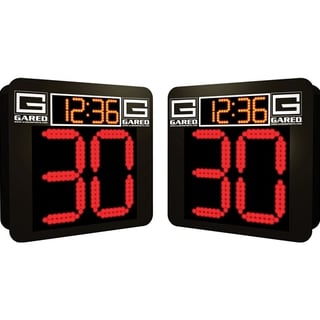 Sporting all the features of our GS-200 model, the GS-202 also comes equipped with a handy game timer.  The 4” game clock digits are displayed in bright orange and give participants another place to look for remaining time of play.

Both cable-controlled models come complete with keyboard controller, plug-in adapter, loud horn and 100 feed of control cable per clock.  For an additional cost, facility operators can also choose to go with a wireless remote control system, eliminating wires and adding a streamlined look to their gymnasiums.