Mobile Grandstand Bleachers for the town of Chilliwack, British Columbia

Nestled in the lower mainland of British Columbia, lies the City of Chilliwack, about an hour’s drive from the province’s largest city, Vancouver.  Boasting a population of roughly 84,000 residents, Chilliwack was incorporated back in 1873 and is one of the oldest municipalities in British Columbia. One of our most recent and rather interesting projects once again landed us in western Canada when the City of Chilliwack expressed interest in a need for a unique and versatile bleacher seating system.

The project went out to public tender and together with our partners at RecSport Products, we were able to secure this unique bleacher seating system in western Canada. The client was in need of a large-scale grandstand bleacher system that in addition to seating a fairly large crowd, could be easily transported to various locations when needed.

The product that was determined to be the best fit for the City of Chilliwack was the TSP10C Series Mobile Grandstand Bleacher from our partners at Century Industries in Indiana. These mobile bleachers and grandstands offer customers fast and efficient expansion of spectator seating with the added benefit of the ability to safely transport the entire system to various locations. These transportable bleachers and grandstands are safe to transport on public roadways and once on site are easily operated by just one individual. 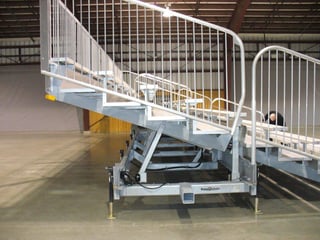 The City of Chilliwack ended up with the TSP10C-300 model grandstand, the largest mobile bleacher available from Century Industries. This model can safely house up to 300 spectators with 10 rows of seating measuring at 46’1” in length and a total depth of 19’6”. The structure is made up of a 12” galvanized steel channel main frame paired with 7” galvanized steel channel supports for strength and a complete guard rail system that automatically fold and unfold for safety.

While the transportable nature of this grandstand bleacher gives the customer unmatched versatility, the true beauty of this system lies in its ability to quickly fold and unfold for either storage or transportation. Powered by a self-contained hydraulic actuation system, this bleacher system is operated with the ease of a push of a button and features a self-stowing over-centre design for towing.

The benefits of this type of bleacher seating system go far beyond the ability to easily move the system to various locations. These types of mobile bleachers also allow customers to rent these systems to neighboring municipalities, events and other venues when not in use. 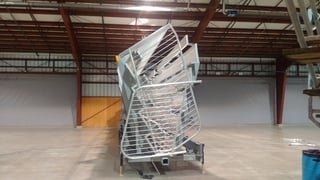 When the product was ready to be shipped to the end user, we relied again on our stellar partners in western Canada. The professional team at Bert’s Towing ensured that the system was safely transported in a timely manner and delivered to the City of Chilliwack. Upon arrival, our partners at RecSport Products, then proudly gave the proper training to the customer, guaranteeing both customer satisfaction as well as familiarity with the product, its functions and safety procedures.