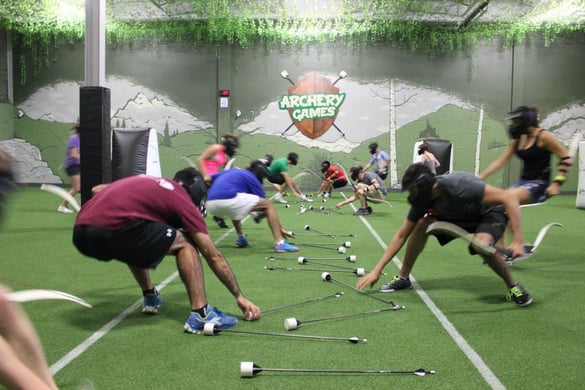 A new and rapidly growing sport has just touched down in Canada’s capital region as Archery Games recently opened Ottawa’s very first Archery Tag location. Archery Tag is a sport that resembles dodge ball, but without the balls. In this intense game, participants are equipped with bows and patented foam-tipped arrows.

Two teams are separated by a ‘safe zone’ and are equipped with specialized targets. Each team battles to tag opponents with their arrows and also knock out the five discs that make up the opposing team’s target. Much like dodge ball, players are eliminated once tagged with an opposing arrow, but are eligible for return when a target spot is knocked out or when one of their teammates is able to catch an opposing team’s arrow.

With the rapid expansion of this increasingly popular sport, Archery Games in Ottawa approached us during the early stages of developing their playing arena. A priority for the organization was the ability to contain the arrows and protect the building and equipment from potential damage. Together, a unique netting solution was devised to encompass the entire 3400 sq ft playing area.

The netting was used to close in the exposed ceiling and protect equipment such as light fixtures and fans and was also used along the perimeter of the space. Once the netting was in place, the team at Archery Games got to work weaving an intricate series of vines through every inch of the netting, which took roughly two weeks to complete. After the addition of a new green sports field and large wall mural, the space had been transformed into a fully contained forest-like environment and playing field.

The space was designed with two large structural poles inside the playing area, which our design team was called upon to design and manufacture a customized pole padding product for, to ensure a safe area of play for all participants.

The facility recently opened its doors and has enjoyed huge success and given the explosive popularity of this new pastime, we don’t expect it to slow down any time soon.

For more information about Archery Tag visit www.archerytag.com or to get out and play in the Ottawa area, check out www.archerygames.ca or stop by their new facility at 1860 Bank St., Unit #3B in the nation’s capital.