With projects completed in Africa, the Middle East, the Caribbean and many other areas around the world, we were more than ready for an exciting project in beautiful South America. Hooking up with our new Peruvian partners at Sensei Sports, we took on a large project at Colegio de Alto Rendimiento (COAR) which was in the market for some new bleachers.

The school is located in Arequipa, the second most populous city in Peru, after Lima.  Arequipa is often dubbed the Legal Capital of Peru because it is home to of the country’s Constitutional Court and because it carries an urban population of over one million residents.

As the school was planning some drastic renovations to their athletic spaces, the search was on for a state-of-the-art telescopic bleacher seating system. After a couple initial phone calls between the teams at Sensei and Sport Systems, it was clear that this partnership would be the perfect fit for the project. 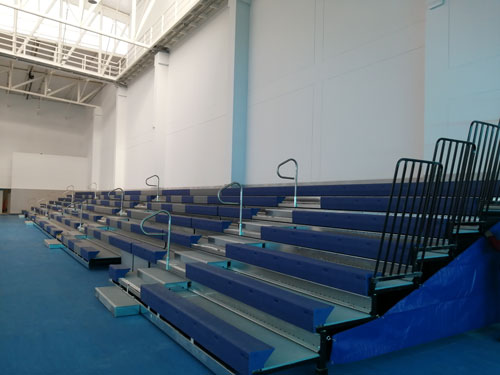 Following the bidding process, Sensei was awarded the contract and together, we crafted the plans and designs for the bleachers that would soon find a new home south of the equator.

The designs were quickly submitted to key stakeholders within the project and following some initial reviews, they were approved.

Our team quickly got to work manufacturing the bleachers to spec and began to plan the complex logistics needed to get them to Peru safely and on time. Our team handled the process seamlessly, having a great deal of experience with international logistics, particularly with our sought-after telescopic bleachers.

Following the manufacturing process, shipping containers promptly arrived at our warehouse, were safely loaded, and bound for Peru. The shipment was met by the experienced team at Sensei who quickly began the installation, while we readily provided any and all support required during the process. After a day or two of installation at the school, the bleachers were ready for use. 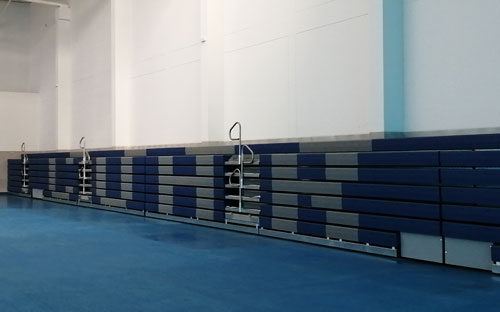 Taking advantage of custom colouring and lettering, COAR now has a place to safely seat spectators for upcoming athletic events.

We’d like to extend our gratitude to the good people at COAR and our new partners at Sensei Sports for an absolutely seamless project that went off without a hitch. We look forward to working more in this beautiful country and in many others in the near future.