One of our more recent projects brought us back to Canada’s most southern city, Windsor. Tucked along the Detroit River directly across from the Motor City (Detroit), Windsor is a major player in the Canadian automotive industry and the area’s 400,000 residents.

Working closely with the Windsor Essex Catholic District School Board in southern Ontario, we were contracted to perform some work at Holy Names Secondary School on the south side of Windsor.

Home of the Knights athletic program, the school was scheduling a two-phase approach to the construction of two sets of large bleachers and a press box to adorn their new field and track.

After the track was completed, the professionals at Worldwide Turf completed the new turf installation for the field in the centre of it all. Upon completion of that part of the project, our team was called in to complete the first phase of bleacher construction and the installation of the press box.

Our team was tasked with the design, supply and installation of a completely customized non-elevated 10-tier grandstand bleacher system. The seating would extend to 45 feet in length and would allow for grade-level wheelchair access paired with a custom end aisle access directly to the press box landing. 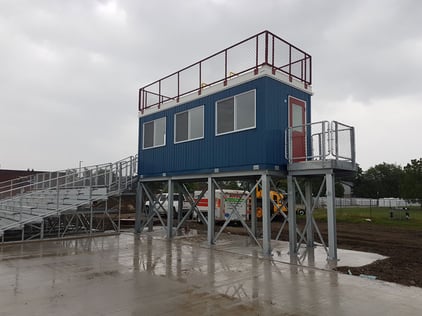 The press box was 8’ x 24’ in size and was completed with a customized rooftop area built for filming sporting events and games while in play out on the field.

Currently speaking, phase one is complete with the press box situated to the right of the existing bleacher. To its left, a freshly poured concrete pad awaits the second phase which will see a similar sized bleacher to place the press box directly in the centre of all of the school’s spectators and fans.