Permanent and Portable Bleachers for the University of New Brunswick 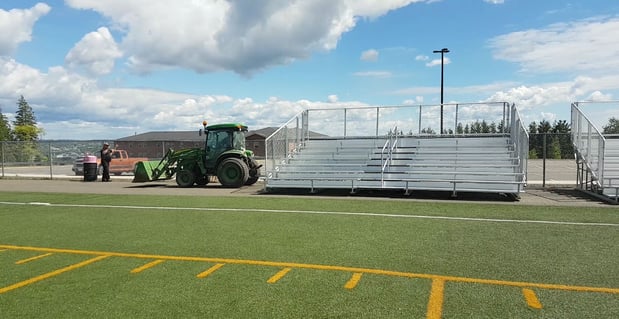 With two campuses in the province of New Brunswick, the University of New Brunswick (UNB) is solidifying itself as one of Canada’s premiere post-secondary institutions. Boasting over 230 years of history and over 75 program choices for current and prospective students, UNB aims to provide an exceptional and transformative education for their students, by encouraging initiative and innovation, unlocking their creative potential.

As part of their budding athletic programming which includes representation in sports such as basketball, soccer, volleyball, hockey, and swimming, UNB approached our team for assistance in replacing some dated bleacher seating. Located on the outdoor portion of the BMO Centre located on the school’s Fredericton campus, the existing bleachers had been deemed to have served their purpose over the years and were no longer code-compliant.

The institution was not only interested in a direct replacement option for the existing bleachers, it wanted a solution that could serve the campus in a number of different ways for a number of years. After consulting with key stakeholders with UNB, it was decided that the school would be best suited with two bleacher systems.

Serving as a replacement for the existing bleachers, UNB selected a 1 x 8 tier x 60’ long angle frame bleacher with seating for about 300 people to be permanently placed on the field’s sidelines. With a growing campus and available programming for students both academically and athletically, UNB was interested in a more versatile seating solution. 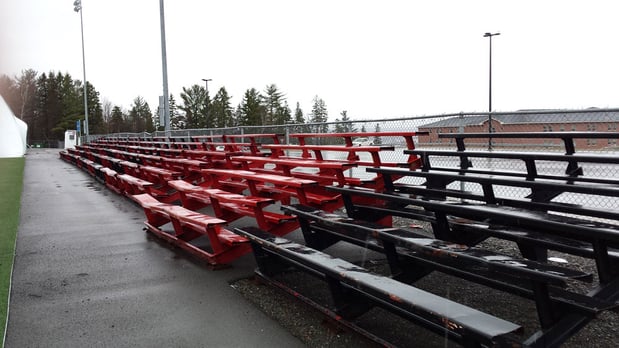 Image: The outdated bleachers at UNB

With a growing need for portable seating options, the school had us design a completely customized transportable bleacher solution. Slightly smaller in size than the stationary option the school ordered, this bank of bleachers measured 1 x 8 tier x 24’ long, providing seating for 120 spectators. This portable bleacher was designed with a tandem axle system complete with a heavy-duty jack. The bleacher can be jacked up, wheels installed and moved anywhere around the stadium.

With two new bleacher seating options for one of North America’s fastest-growing educational institutions, UNB is certainly setting themselves up for success on and off the field.