Phase 1 of the Richardson Stadium Revitalization at Queen’s University 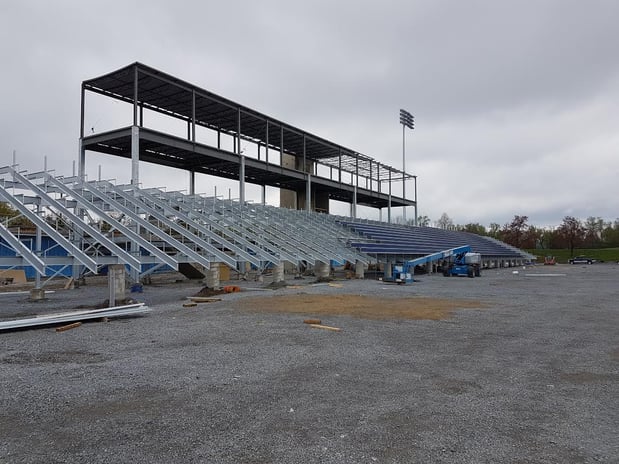 The end of 2015 was an exciting time for us at Sport Systems, as we were proudly awarded the contract for the redevelopment of the historic Richardson Stadium at Queen’s University.  It was opened in 1921 and nearly a century later, it still remains home to the Queen’s Gaels Soccer and Football teams.

Iconic games and championships checker the stadium’s historic tenure in Kingston and now, once again, the stadium will enter into a new era of the school’s athletic programming.

The plan outlined a plethora of new amenities for teams, coaching staff members and spectators with the focus being on improving spectator sightlines and all-inclusive integrated seating options.  The innovative bowl seating design will soon house up to 8,000 spectators which aims to bring fans one step closer to the field of play, intensifying the stadium experience. 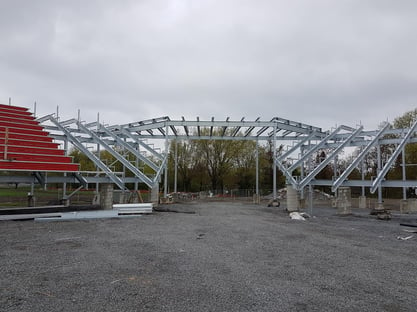 A freshly designed press box serves as the centrepiece of the stadium, accompanied by the fully accessible concourse surrounding the top level of the bowl seating.  In addition, both the east and west sides of the stadium will be completed with fully accessible seating, allowing easy access for wheelchairs and other equipment.

Our crews broke ground in the cold winter months and quickly began installing the framework that would eventually become the backbone of this stunning project.  Our innovative beam structure design ensures both a rigid and durable structure and one that can safely seat the legions of fans expected at this season’s home games. 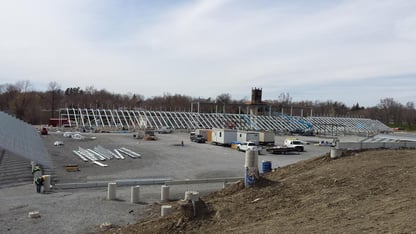 As we near the completion of this project and the beginning of the Gaels football season, a new video scoreboard has been erected and will soon be paired with two score clocks adorning each end zone.

State-of-the-art turf will blanket the field of the stadium, designed and installed by the professionals at Field Turf.  In addition to providing Richardson Stadium with their artificial turf surface, their work also includes installations at the New England Patriots’ Gillette Stadium and the Seattle Seahawks’ CenturyLink Field among their 7,500 plus installations.

Stay tuned for more updates as we continue to progress through the final stages of this project.  Be sure to subscribe to our YouTube Channel for updates and visually stunning presentations surrounding this project.