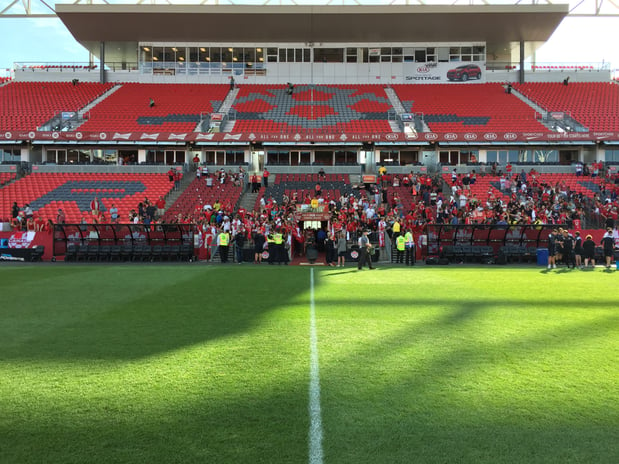 Founded in 1931 by Constantine (Conn) Smythe, who was the principal owner of the Toronto Maple Leafs from 1927 to 1961, Maple Leaf Sports and Entertainment(MLSE) is a powerhouse in the professional sports arena.  In addition to controlling the National Hockey League’s most valuable franchise, the organization also owns the Toronto Marlies of the American Hockey League, the Toronto Raptors of the National Basketball Association and the Toronto FC of Major League Soccer.

As part of one of our recent projects, MLSE reached out to us in search of adequate sideline shelters for use on BMO Field, the home of the Toronto FC.  As Canada’s first soccer-specific stadium, BMO Field was erected in 2007 and has since gone through a number of transformations including a two-phase expansion that took place over the course of 2014 and 2015.  The $120 million expansion included additional seating as well as updated clubs and suites to now also become the home of the Canadian Football League’s Toronto Argonauts.

Given the timing, key stakeholders at MLSE were in need of both a high-quality product and expedited turn-around time.  As the soccer season was already in full swing, the organization needed a company that could not only supply the needed soccer shelters quickly, but one that could install them while the team was on a road trip.

MLSE ended up ordering a pair of our Portable Elite Team Shelters and one of our Portable Elite Staff Shelters.  These team shelters are among the best products on the market today, serving a number of soccer organizations across North America.  The sturdy aluminum frame and smoke-coloured polycarbonate panels give players refuge on the sidelines and can each seat up to 16 players.

The similarly-equipped staff shelter was also installed on the field, giving trainers and coaching staff a covered headquarters for game time strategy and planning.

Our team was able to secure delivery of the shelters directly to the stadium within four days and our installation team had the shelters ready within a 48-hour period while the Toronto FC was away from their home pitch.