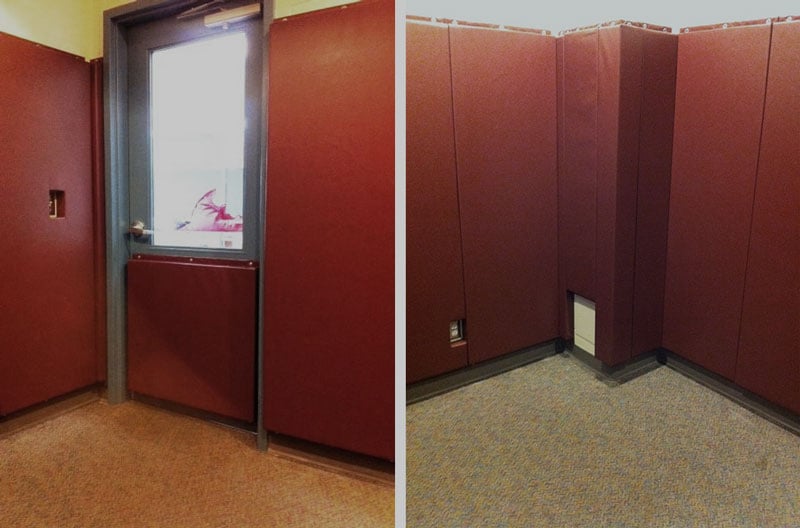 Administering Roman Catholic schools scattered throughout the western portion of eastern Ontario, the Algonquin Lakeshore Catholic District School Board is comprised of over 30 elementary schools and 11 secondary schools in the region.

As part of their equitable and inclusive education standards, the schools residing within the board are built on the foundations of discipleship, scholarship, and stewardship. As such, a number of the schools are equipped with specialized rooms that allow for a quiet or safe place for students who sometimes thrive by being temporarily removed from the often noisy and busy environments characteristic of the classroom.

As a part of this initiative to provide these types of spaces, the school board approached our team when it was time to provide some upgrades to a couple of the schools in the district. With existing quiet rooms already installed, it was deemed time to upgrade one of the facilities and create a new one in another school.

Our first project was scheduled at St. Gregory Catholic School in Picton, Ontario. Here, the school was equipped with a quiet room but the space only had a couple of out-dated gym mats hanging on the wall – most in need of an upgrade.

Looking to upgrade to our permanent wall padding as well as our removable floor padding, our team was on-site to visit with both school officials and their own installer Mr. Greg King from King Carpentry.

Measurements were quickly verified and production soon followed. Mr. King took care of the installation and did an excellent job. One of the pads needed to be slightly modified on-site and Mr. King had the skills to make the modification for the pad to fit perfectly.

The second school was St. Theresa Catholic School in Belleville. This school had a room that did not have any existing padding and officials were hoping to replicate some of the success found with quiet rooms at other schools within the board.

It was decided that our permanent wall padding and custom door padding would allow their special needs student a pleasant space to have some quiet time in a safe environment, much like the space at St. Gregory.

Once again King Carpentry was involved and this time it was Mr. King who performed all the room measurements. This included a custom door pad and several cut-outs for outlets and light switches.

Mr. King was spot on with his measuring once again and performed the entire installation himself.