It was a hot night of racing at “Canada’s Toughest 1/3 Mile”, the historic Peterborough Speedway, as fans were treated to a full program of racing which included appearances by Ontario Mini Stocks, Renegade Trucks and Earl Ireland Auto Sales Late Models, the INEX Ontario Legends and Ontario Modifieds.

Gould, a Ministock star from Capital City Speedway in Ottawa, decided to try his luck in central Ontario by hauling the Sport Systems Canada Inc. (SSCI) Mopar Ministock down Highway 7 to take on the locals at Peterborough and notched a 3rd place finish in the first heat and a 4th place finish in the 2nd heat.

Feature race action got underway with a 20 lapper for the Ministocks, with Dwight Lavoie and Steven Brier on the front row. The pack was working through the backmarkers with just six laps on the scoreboard, as Lavoie had a four-car battle in his rearview mirror. Almonte, Ontario's Nolan Gould grabbed the top spot at halfway, with current point leader Tyler Junkin chasing his back bumper. With drivers fighting for position throughout the pack, the feature ran caution-free with Gould taking the win over Junkin. Brandon Hannah, Lavoie and Donovan Price finished out the top five.

“This was a great night for our team and for the SSCI brand!” exclaimed Gould in post race interviews with speedway press.  “Peterborough has traditionally been one of our most difficult tracks but I’m glad we made the trip this Saturday.  It’s great to come home with a win from Peterborough and even better when you can run up front with speedway regulars.  We are hoping for a few more starts down here in 2015!” 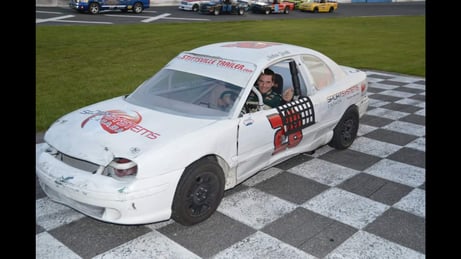