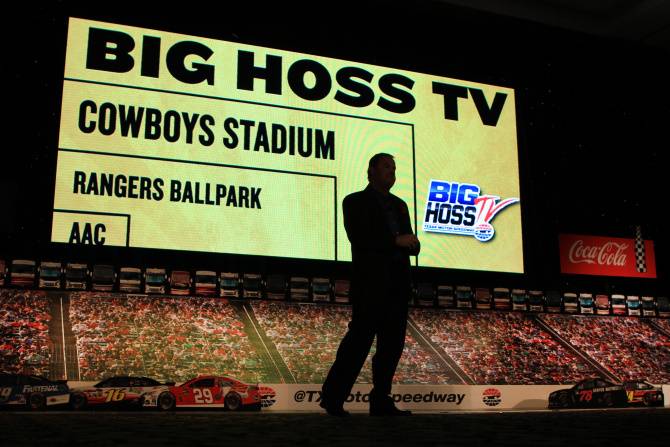 This past March, the Texas Motor Speedway unveiled the largest HD sports screen in the world. Aptly nicknamed the “Big Hoss TV”, measures at 218 feet in length and comes in at about 95 feet in height. The HD screen is located at about 125 feet above ground level, sitting over the middle of the backstretch of the 1.5 mile track in Fort Worth, Texas.

This is yet another monstrous screen located in the Lone Star State, rivalling most other sports venue screens around the world.

A few months prior to the unveiling of the “Big Hoss TV” in Fort Worth, the folks down at the now SEC college, Texas A&M are in the middle of a $450 million renovation, with their goal of making Kyle Field and College Station, Texas the premier destination in college football. 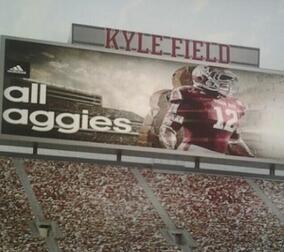 Part of that $450 million budget includes replacing the existing jumbotron with what will prove to be the largest screen in college sports. In addition to adding over 20 000 seats to their over 80 000 capacity, the new screen is said to measure at 163 feet in length and a whopping 47 feet in height.

With the departure of their coveted Quarterback, Johnny “football” Manziel, Texas A&M is obviously swinging for the fences with hopes of further cementing their reputation for housing the loudest (and now most clearly displayed) 12th man in college football.

The renovations began last fall, and at this time are on track for the beginning of the 2014 Fall Football season.

By comparison, Texas A&M University’s new screen will become a very close rival to their distant neighbors in Dallas. When Jerry Jones and the Dallas Cowboys opened Cowboys Stadium (now AT&T Stadium) back in 2009, they housed one of the largest video screens on earth (currently the 4th largest HD screen in the world). The screen, which spans between each 20 yard line, measures 72 feet in height by 160 feet in length, continues to wow spectators and can often be seen during live television broadcasts.

Just south of Dallas, however, the Houston Texans stole a bit of Jerry’s steam when the team unveiled their end zone displays in preparation for the 2017 Super Bowl to be hosted at NRG Stadium (formerly Reliant Stadium). These screens are said to be the largest of their kind, measuring at a total of 14 549 square feet.

The state of Texas is home to the largest concentration of mind-blowing high definition sports screens in the world. With the screens in this article alone accounting for about 55 000 square feet of high definition bliss for sports fans, the question as always, is what could be next?