Two 10-Row Bleachers for the Town of Ajax 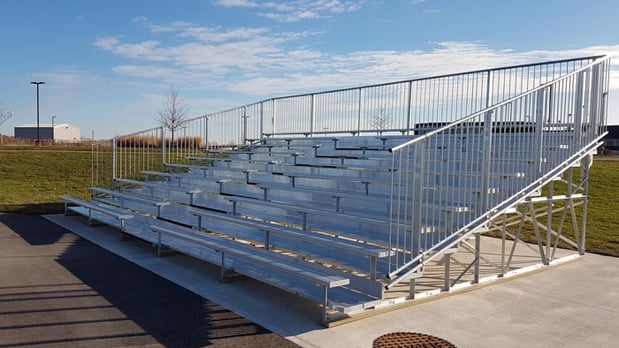 Named after the World War II Royal Navy cruiser the HMS Ajax, the town of Ajax, Ontario lies along the shores of Lake Ontario. Acting as an anchor for the eastern portion of the Greater Toronto Area, many of the area’s residents commute daily to the great City of Toronto.

In the spring of 2017, the Town of Ajax released a public tender to equip their new sport field at the Audley Recreation Centre. Located in the north end of town, the complex is one of the main hubs for community sports in Ajax. The centre boasts two swimming pools, a full-size gymnasium, community room with teaching kitchen, preschool room and a fitness and dance studio. Moving outdoors, Ajax residents enjoy the centre’s splash pad, skate park, tennis courts, basketball courts and inclusive playground space.

As an addition to the stellar offering of amenities, the town was in the market for bleacher seating for a new sports field under development outside. Without specification in the tender documents, we spoke with city officials who deemed our product an equal throughout the process.

As such, the CSL Group was successful in attaining the bid and immediately contacted our team to supply and install the two large banks of bleachers slated for the sports field.

Each bleacher was to be 10 rows in height and 30’ in length to seat up to 100 spectators. With an eye on safety, the town also chose our upgraded picket guard rail system rather than the standard chain link system found on many bleachers.

After a summer full of wet weather delays, our crews were finally able to pour the concrete slabs on which these structures would be erected in November. Shortly after the pouring process, our team was on-site to install these beautiful seating structures that now adorn the sidelines of the facility’s new sports field.