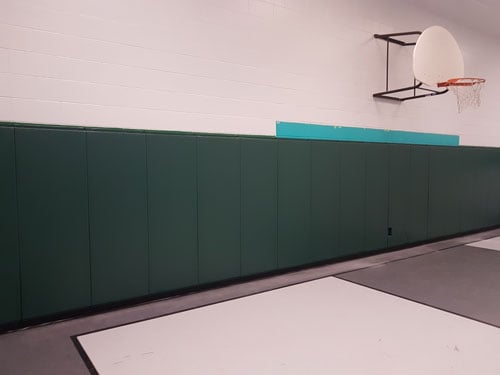 At the mouth of the Moira River on the Bay of Quinte in central Ontario lies the town of Belleville.  Settled in the late 1700’s, the town, referred to as the heart of the Quinte region, is home to a number of public elementary and secondary schools along with post-secondary institutions such as Loyalist College and the Academy of Learning College.

It was the Hastings and Prince Edward District School Board, however, that brought our team to town on this occasion as a pair of the school’s in the board were looking for new wall padding for their gymnasiums.  As such, our sales team quickly were acquainted with keys stakeholders from the organization, kicking off the initial stages of the planning process.

At V.P. Carswell, located in close proximity to Canadian Forces Base Trenton, the elementary school was in need of a replacement solution for their outdated wall and stage padding.

Our stage padding solution fit the bill perfectly for this situation, their hinged design allowing for easy access for the storage unit below.

Moving over to Harry J. Clark, the fire marshall in the region was adamant that only fire-rated padding be used in this particular application.  As such, the client chose our PV-FR fire-rated wall padding with a touch of customization, pleasing key stakeholders within the school board, as well as the local fire department.