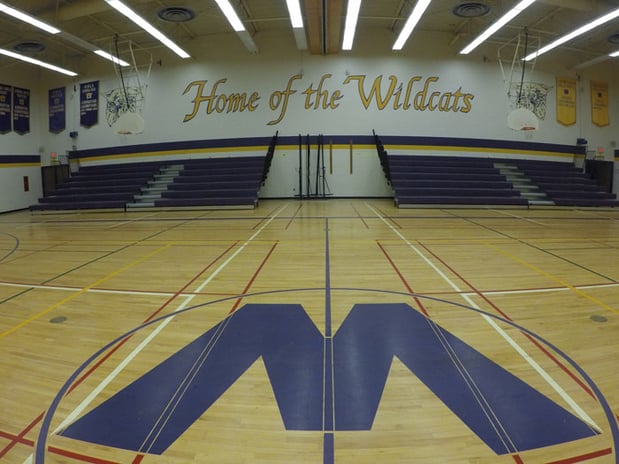 Traveling to the small, yet bustling town of Lindsay, Ontario, our team was on-site to install a pair of telescopic bleacher banks at a local high school.

Located slightly west of Peterborough, Lindsay is home to Fleming College and was crowned as home to the world’s oldest hockey stick which was thought to have been carved just outside of Lindsay between 1852 and 1856 by Alexander Rutherford Sr.  The stick has since been rumoured to have been sold at auction for a whopping $2.2 million and the town also played host to the production team of 1983’s A Christmas Story while scenes were filmed in the small town.

As part of the Trillium Lakelands District School Board, I.E. Weldon Secondary School was the site of a project our team had the pleasure of completing last month.  Home of the fierce Wildcats, the school was looking for a replacement to their out-dated retractable bleacher systems that had been removed at the conclusion of the school year earlier this spring.

The school board reached out to our team to design a solution for the space and one that would be safer and more inclusive for the school’s growing student body and athletic programming.

What was ultimately selected were four separate banks of retractable bleachers, each five rows in height.  With their lightweight construction and ease of operation, the board ended up selecting one of our non-motorized models which could easily be opened or closed by any members of the school’s facilities staff.

Additionally, to add a level of customization and team spirit, the board decided on a customized purple colouring for the seating.  Fitting perfectly in the yellow and purple-branded gymnasium, the school’s students now have yet another reason to celebrate the athletic prowess that is I.E. Weldon’s athletic programming.