Constructed in 2004, the Bell Sensplex serves as the official practice facility for the NHL’s Ottawa Senators hockey club. Built in partnership with the City of Ottawa, the 180,000 square foot facility boasts three NHL-sized ice surfaces, one Olympic-sized ice rink and an indoor fieldhouse and additionally serves a number of minor hockey leagues and short track speed skating clubs in the greater Ottawa region.

We were recently contacted by stakeholders from within the Sensplex organization with questions regarding some safety netting for the Olympic-sized rink inside this community-focused athletic facility.

With netting already installed behind both goals (at each end of the rink), in the interest of public safety, they were looking for a comprehensive netting solution to completely protect spectators from out-of-bounds pucks around the entirety of the rink.

As part of the project, our team was on-site to take detailed measurements of the exposed areas as well as to assess the complexity of the areas that would require custom cuts such as finishing around doors.

Once this was completed, the project was sent to production, using our ultra-durable monofilament netting complete with a roped border including all custom cuts for around areas such as doorways.

The system was designed to fit precisely with the existing netting and the new system was successfully installed without a hitch. 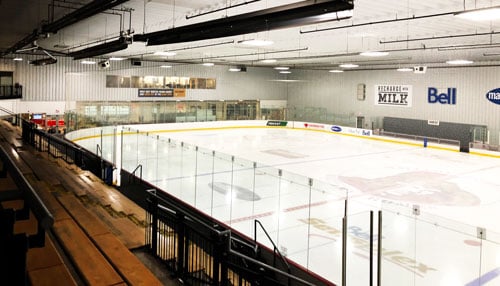 As one of the city’s busiest hockey facilities, parents and spectators can take in practices and games knowing that they are now properly protected from any stray pucks, sticks or other projectiles coming from the ice surface.