Phase 2 of the Richardson Stadium Revitalization at Queen’s University 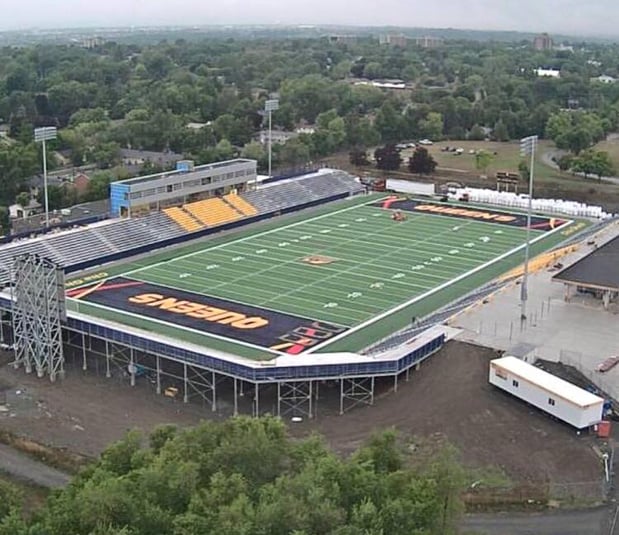 While this project initially kicked off in early 2016 with the demolition of the old grandstands and press box in the bitter cold of winter, we are now beginning to see what will be a new era of Queen’s Gaels football.

As we rolled into the summer months, the framework that will soon become one of the premier collegiate athletic venues in Canada began to take shape.  As the framework of what will soon house 8,000 avid fans was erected during the late spring, the past few months saw the stadium truly take shape.

Upon that solid framework, our team installed colour-coordinated seating; the school’s colours of blue, yellow and red, handsomely adorning the structure.  In addition to the seating, the press box has been constructed and put into place and now eagerly awaits the finishing touches.

Sporting a comprehensive bowl seating design, the stadium is now complete with durable aluminum planks atop the steel angle-frame that makes up the backbone of this large spectator seating structure.

As we push into the final stages of the stadium build, field turf, uprights and the finishing touches are all expected to be completed before the Gaels football opening game on September 17, 2016.

We invite you to watch our video highlighting Phase 2 of construction on this beautiful stadium and invite you to stay tuned for the final phases of a project, which we are so very proud of: