Sport Systems Named One of Canada's Fastest Growing Companies in 2017 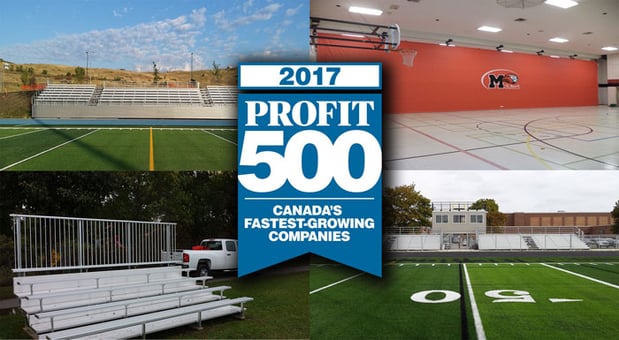 Ottawa, ON (September 14, 2017) Canadian Business and PROFIT today ranked Sport Systems No. 319 on the 29th annual PROFIT 500, the definitive ranking of Canada’s Fastest-Growing Companies. Published in the October issue of Maclean’s magazine and at CanadianBusiness.com, the PROFIT 500 ranks Canadian businesses by their five-year revenue growth.

“It is never easy to earn a spot on the PROFIT 500, but this year’s applicant pool was the most competitive yet,” says Deborah Aarts, PROFIT 500 program manager. “This year’s winners demonstrate the resilience, innovation and sheer management smarts it takes to build a thriving business today. Canada—and the world—needs more entrepreneurial success stories like these.”

“We are honoured once again, to be on the PROFIT 500 ranking,” says Vice President and General Manager Jeff Hurrle. “Achievements such as this one reflect highly on both the quality of the great people within this organization as well as within the products they deliver to our customers around the world.”

This is the fourth time in the last five years that Sport Systems has been ranked by the PROFIT 500, receiving the honour in 2013, 2014 and 2016.  This year our company also partnered with the Ontario Government through the Eastern Ontario Development Fund.  The funds awarded were used to expand manufacturing capabilities and bring more jobs to the local economy.

Find Us On The Web

Founded in 1928, Canadian Business is the longest-serving and most-trusted business publication in the country. It is the country's premier media brand for executives and senior 5

business leaders. It fuels the success of Canada's business elite with a focus on the things that matter most: leadership, innovation, business strategy and management tactics. Learn more at CanadianBusiness.com.

Sport Systems is North America’s premier manufacturer and supplier of industry-leading athletic equipment and infrastructure.  Providing our growing client base of private, public, municipal, military and educational organizations with everything from basketball hoops and custom padding solutions to large-scale grandstand bleacher seating solutions for over 35 years.