Following the success of a number of projects in Nebraska including a new grandstand bleacher for Pawnee Park in Columbus and new telescopic bleachers for Omaha Christian Academy, we were once again paired with our partners at Crouch Recreation.

Uncovering a wonderful opportunity to replace some outdated retractable bleachers in an Omaha high school, key stakeholders at Crouch Recreation brought the project to our attention and we quickly pooled our resources to have a detailed look at the project.

Located at Millard South High School in western Omaha were a number of retractable bleachers that no longer could satisfy building and safety codes and were quickly becoming a maintenance headache for the local high school.

In search of a solution for the school’s impressive athletic facility, the size and scope of the project was exciting for all involved. To get the project installed in a timely fashion, AD Screen Group, a partner of Crouch Recreation was also brought in as a strategic partner in our combined bid for this exciting project.

After months of deliberation, our bid was delivered in late 2018 and was quickly approved in early 2019. Upon acceptance, we deployed key representatives to the school to gather necessary measurements, photographs and to meet with key stakeholders from the school district.

The measurements were sent up to our design team who immediately got to work on the concept that would eventually become a reality in the gymnasium of Millard South High School.

The design included three separate banks of retractable bleachers, two designed to be installed on the floor level and the third set to reside in the mezzanine section of the gymnasium.

Included in the preliminary designs was a custom colour scheme that would see the bleachers take on the school’s colours of red and grey. 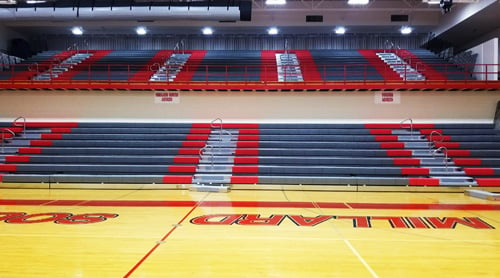 Once the design was approved, production of these impressive bleachers was kicked into gear after which the units were shipped directly to Omaha and met by the teams at AD Screen Group and Crouch Recreation.

The bleachers were safely handled while the removal of the existing bleachers was performed with precision. Once the gymnasium was clear of the outdated bleachers, construction began on the new seating structures.

Today, the school is home to these three impressive seating structures that can accommodate up to 2,000 spectators inside the high school gymnasium. In closing, this completes yet another stellar project we were more than happy to have been involved with, with our established partners at Crouch Recreation and new partners at AD Screen Group.