Phase 3 of the Richardson Stadium Revitalization at Queen’s University 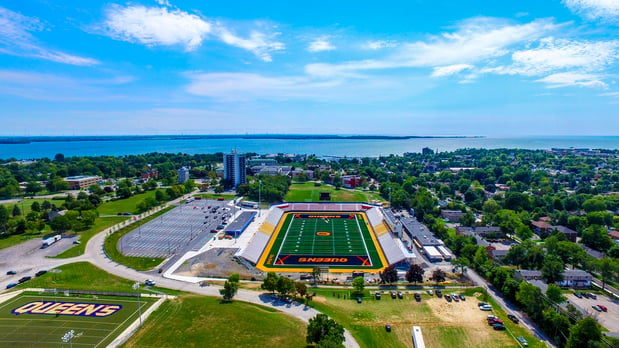 Here we are a mere few days ahead of the kickoff of the Queen’s Gaels home opener football game slated for this Saturday, September 17, 2016 in Kingston, Ontario.  It feels like just yesterday that our crews began to break ground at this historic site at Queen’s University and what has been erected is nothing short of breathtaking.

The 8,000 seat stadium, which rose from the demolition over the past few months will arguably stand to be Canada’s premier collegiate athletic stadium, boasting an innovative top-loading bowl seating design.

As the structure was erected, as depicted in Phase 2, the future of Gaels football was within sight.  Now as our team and partners polish the finishing touches, the stadium is ready to be revealed to the nation.

Saturday’s game not only marks the start to another season of Queen’s football, but also marks the university’s 175th anniversary.  In addition to the stadium revitalization, the Queen’s Initiative Campaign concluded on April 30, 2016.  The initiative surpassed the school’s $500 million goal resulting in more than $640 million in donations from over 60,000 donors, investing further in teaching and research at Queen’s University.

“This is a proud moment in Queen’s history.
The university is enormously grateful to all of our volunteers and donors who recognize the value of a Queen’s education, and have invested in making one of Canada’s top universities even better."

We are very much looking forward to the kickoff of Saturday’s home opener as well as the dawning of a new era of athletics at one of Canada’s most storied educational institutions.

Watch Our Phase 3 Video Below: