A New Bed for Esther The Wonder Pig 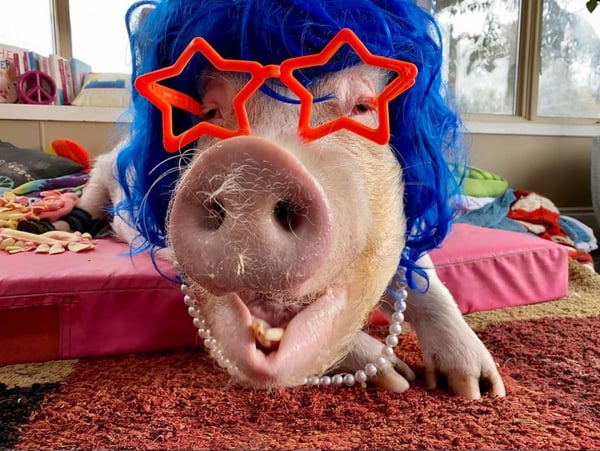 When it comes to family pets, dogs, cats and perhaps the odd small-sized rodent are probably the first options that come to mind. The choice of a household companion undoubtedly comes with a large level of responsibility and when Steve Jenkins was offered a micro piglet for adoption by an old friend, he was admittedly unsure of the journey he was about to embark on.

It was the summer of 2012 when Steve and his partner Derek first crossed paths with the adorable little pig. From that point on, their lives were changed forever.

Marketed as a micro piglet, Steve and Derek knew the decision was going to require some adjustments to their daily lives. As time went on, it quickly became apparent that the micropiglet that they agreed to raise was anything but.

It took about two years for the lovable pig named Esther to weigh in at a whopping 600 pounds, forcing Steve and Derek to make yet another life-altering decision. With a pet of this size, it was clear that Steve, Derek and Esther all needed a little more space. Following some careful consideration, plus some help from Esther, the new social media powerhouse, the trio moved into Happily Ever Esther Farm Sanctuary. 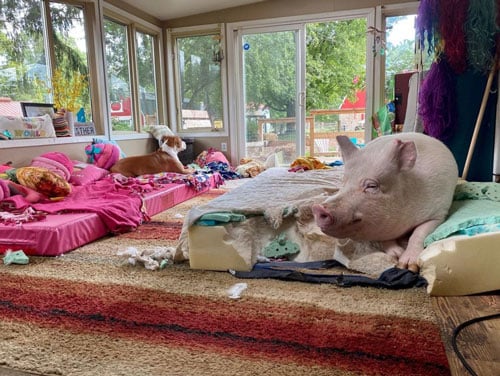 In addition to housing Esther, the farm now operates as a non-profit used to rescue and rehabilitate abandoned and abused farm animals.

We were fortunate enough to have met Esther in a roundabout way when Steve and Derek were in search of a new bed for their beloved pig. Given Esther’s size, it became apparent that a specialized bed was needed to replace the current foam set up she was using. While it worked as a comfortable place for Esther to rest, being a pig, she was constantly chewing, eating and laying on it, causing extensive damage.

They approached us to come up with a comfortable, yet durable solution to this very unique problem. We immediately suggested one of our custom crash pads. Often used for gymnastics, diving instruction, stunts or mountain-climbing exercises, these pads are designed to provide a comfortable landing and are wrapped with our ultra-durable vinyl. After getting the dimensions from Steve and Derek, our team quickly got to work on the new padding for Esther. In addition to utilizing one of our most popular products for her new bed, Esther went a step further adding her own bit of flair with her choice of pink colouring for the vinyl cover.

After receiving the new bed, it took a little coaxing to get Esther used to her new digs but over time, she quickly became accustomed to it. So much so, that after a short period of time, her owners placed another order for a similar pad that would be used as a pillow. Given her princess-like personality, Esther enjoys sleeping in a slightly inclined position and her new pillow would facilitate her needs perfectly.

For more information about Esther and the farm, please visit: https://www.happilyeveresther.ca/