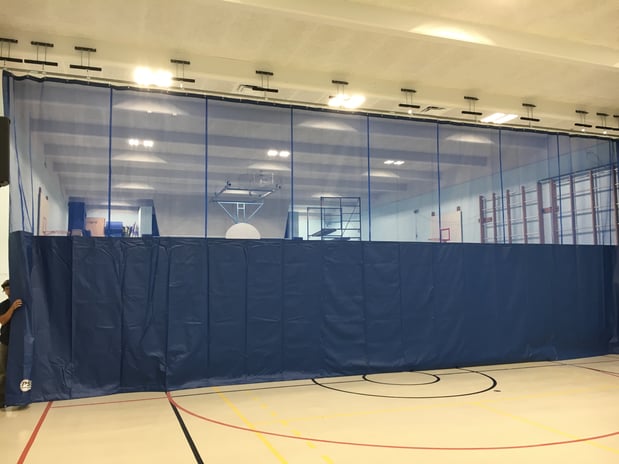 One of our more recent projects landed us in Ville-Marie, or more commonly known as Old Montreal. The hustling, bustling and culturally diverse city is the most populous in the province of Quebec and was once the commercial capital of Canada until the city of Toronto took its place in the 1970s.

This project took us to the southeastern portion of the city, where we joined forces with our partners at Constructions et Installations Sportifs for this installation. The site was Edward Murphy School, a member of the English Montreal School Board featuring both an English core program as well as French immersion programming for its student body.

As the student population of the school continued to grow, the need to accommodate more students in the facility’s gymnasium had become an immediate concern. As such, stakeholders from the school set out in search of a solution to successfully divide the gymnasium to allow for additional versatility and physical education space.

After a few initial consultations, the school eventually set their sights on one of our walk-draw gym divider curtains to do the job. These gym dividers are economical and are easily operated by one single individual and remove much of the safety concerns that are typically associated with large, motorized curtain units.

While most of these curtains are mounted directly to the truss in the ceiling of the gymnasium, certain design elements would not allow for traditional installation. In this case, our team and our partners in Montreal designed a solution that would instead be mounted using a side bracket. The final product was successfully installed, giving the gymnasium the space and versatility needed by a growing student base.