Steady growth in popularity has helped the sport of hockey gain a broader audience and a larger pool of players from all over North America. According to USA Hockey, there were more people playing hockey in the United States than ever recorded before during the 2013-2014 season.

Where analysts are seeing huge growth in the sport, are with registrants aged 6 and under. The number of registrants in this very young age group has grown by about 4% per year since 2013 and does not show much sign of slowing down.

With this in mind Hockey Canada and Hockey USA recently developed what is now known as Cross-Ice Hockey. This pilot project has taken off for novice-aged players across the continent. Cross-Ice Hockey separates the ice surface in half, allowing games and practices to be played using the width rather than the length of the ice surface. The preliminary findings were astounding. Parents and organizers alike noted that children just starting out in the sport, have experienced more opportunities to pass, skate, stick handle and shoot the puck on goal, as opposed to wearing themselves out skating the full length of the ice surface as previously played.

They have also concluded that the limited space has further developed a sense of team and camaraderie among young ice hockey players by keeping them constantly in the middle of the action. This has also been proven to aid the children in the off-ice development of their social skills and self-confidence. 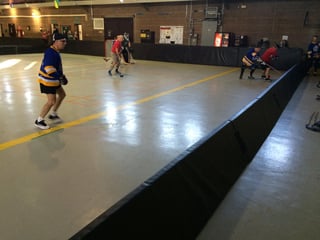 Above Photo: Foam padding dividers being used in a ball hockey application

With these new mandates being rolled out across North America, we have developed a portable or temporary foam padding solution that can easily be used to split ice surfaces when the need arises. As most hockey rinks are used for a variety of ages, many facilities are in need of a durable solution that is also easy to setup and remove.

Our team has designed the perfect product for use in both ice hockey rink divisions and divisions needed with related sports such as ball hockey. Over the coming weeks, we will be rolling out this product line with detailed specifications and pricing information on our website. In the meantime, if you have any questions or would like to receive a quote for a rink divider padding system, please contact a member of our sales team.