Arena Bleachers for the University of Waterloo

One of our more recent projects brought us to the Waterloo region in the province of Ontario.  Home to what many refer to as Canada’s high tech capital, it is also home of the University of Waterloo.  Established by a group of business leaders back in 1957, the university has blossomed into a hub of education boasting some of Canada’s leading quantum computing, nanotechnology, engineering and health science students.

It is also home to the Waterloo Warriors, with varsity teams competing in a variety of athletic disciplines such as hockey, baseball, basketball, cheerleading, rugby, football, golf, tennis and other competitive sports.

The institution reached out to us to aid them in revamping the Columbia Icefields (CIF) centre, an athletic complex that opened in January of 2014, used to support intramural ball hockey, basketball, dodgeball, ice hockey, handball and volleyball. The CIF houses three gymnasiums, a fitness studio, an arena, a ball diamond, five training fields and a state-of-the-art fitness centre.

It was the arena of the CIF that was in need of a re-designed bleacher seating system and after consulting with both our sales team and design team, the university chose a customized arena bleacher seating configuration to complete the project. 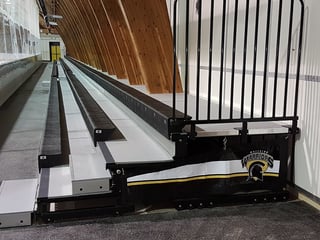 The bleacher measured 162’ and was three rows in height, complete with a custom extended rear deck to allow for standing room viewing.  The customization of the bleacher went even further, as key stakeholders chose innovative HDPE contoured seating with seat numbering and aisle letter identification for easy spectator navigation.

Custom vinyl end curtains were installed with the University logo and branding on them and each aisle was outfitted with intermediate and removable front steps with a non-slip finish conforming to the building code requirements. 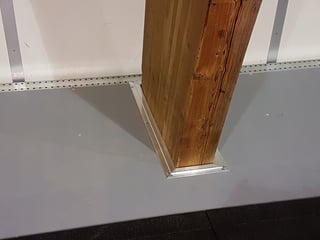 Image:  Custom Notch-Outs Around Wood Beams in the Arena

This bleacher was designed to notch out around the existing wood beams and the deck around the beams was finished with extruded aluminum coping a clean finish. In the end, the new arena bleacher in the CIF arena can now accommodate seating for a total of 303 spectators plus additional space for standing room only viewing.