It is commonly believed that if everyone viewed the world through the eyes of children, society would be a much better place. Despite being at more preliminary stages of development, children see no value-based distinction amongst varying ethnicities, genders, or socioeconomic backgrounds. Implementing this child-like acceptance and celebrating the differences of each individual, the Boys and Girls Club of Ottawa (BGC) has created a safe space for children and teens aged 6-18.

Creating a safe environment for growth and development requires more than just emotional support and good intentions. Also important for each child is an environment in which they are physically safe. Charity Intelligence Canada references the BGC itself stating that, “after-school hours are critical because they can be a time of risk to youth’s health and safety.” Wanting to remain a safe alternative to the potentially harmful influences that exist outside of safe, structured programming, the Boys and Girls Club of Ottawa invited Sport Systems to install new safety padding in their gymnasiums.

The two gymnasiums that received attention were those at the Ron Kolbus Clubhouse (formerly the Britannia Clubhouse) on Dumaurier Avenue, and at the Don McGahan Clubhouse on McArthur Avenue. Both locations are situated in what Charity Intelligence Canada identifies as “at-risk neighbourhoods.” With the Ron Kolbus Clubhouse being open since 1981 and the Don McGahan Clubhouse since 1991, the constant traffic of each building has made continual upgrades and renovations a necessity.

After removing the old and deteriorating padding underneath each gym’s basketball systems, new products were installed. Though cost-effective, the finished products were nonetheless made of the highest quality foam and heavy-duty vinyl. This project increased the safety of the space, encouraging healthy physical activities for children and teens. 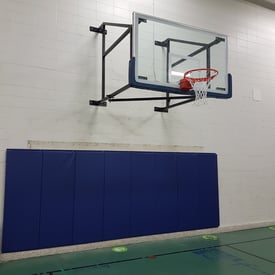 The shared emphasis on serving practical needs is what makes the collaboration between Sport
Systems and the Boys and Girls Club of Ottawa so valuable. It is our hope that, as different
needs continue to arise, we are able to continue lending ourselves as a source of support to the
BGC for years to come.