Bringing us to the far eastern regions of Canada’s capital city, our most recent project brought us to Gloucester, Ontario at the Louis Riel Secondary School.  After a brief stay at another location, Louis Riel Secondary School permanently opened at its current location in 1980 and immediately got to work expanding programming and facilities within the establishment.

Originally serving strictly grades 9-12, the school expanded in 2003 offering programming to grade7 and 8 students, today it boasts a student body of over 700 students.

Proudly located on the school’s campus, the dome houses a multidisciplinary sports field complete with artificial turf, a 400m track, a 120m track, designated areas for jumping and throwing and four locker rooms.  The facility is used by both school students as well as the local community for a number of sports and track and field programs.

As part of the facility’s recent expansion, a new, state-of-the-art sports court surface was installed inside the facility, which among other things, would become a new basketball court.  The renovation took place over the Christmas holidays and is where we were eventually contracted in to lend a hand.

As the new court would be primarily used for basketballand other sports such as volleyballand badminton, a complete netting barrier was needed to keep balls and birds in play, while keeping other facility users safe.

Working closely with both the school board as well as Hobin Architecture Inc, we were commissioned to design, fabricate and install a completely custom indoor netting barrier surrounding the infield of the indoor area where the new flooring was installed for the basketball court.

The finished product consisted of extruded aluminum posts that were completed with a comprehensive pulley system that would allow each netting panel to be raised and lowered when needed.  The netting barrier also was to be designed with two access points and operated on a separate system for quick access.  Two of the netting panels are white in colour and are manually operated by utilizing a walk-draw style cable system, allowing participants to enter and exit the enclosure freely. 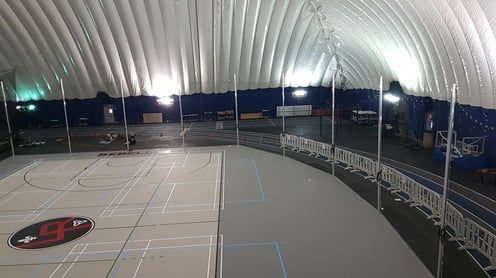 The netting barrier was placed upon the foundation as was engineered by our team of technical experts.  After coring through the existing slab, our team excavated below the slab and safely set ground sleeves in concrete foundations with reinforced rebar cages, providing the system with adequate strength and stability.

The facility was re-opened on January 9th and continues to be an integral part of both the school’s and surrounding community’s sports and athletic programming.