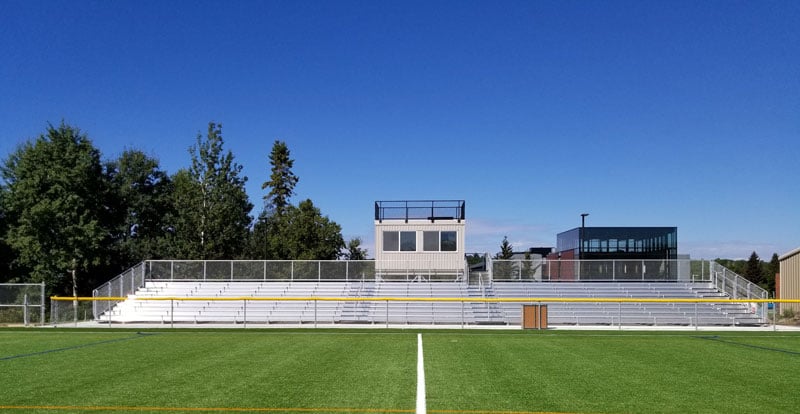 Located in North Bay, the school reached out to us in late 2017 as they were in some preliminary discussions regarding the design of a new bleacher seating system and press box. Known for their athletic prowess in soccer, basketball and hockey (among others), the school’s athletic pride is green and black representing the Nipissing Lakes across the province.

As athletic programming has continued to swell over the years, the school had been developing a brand-new sports field, hence their pressing requirement for ample seating.

With a goal of seating approximately 650 spectators, our team was tasked with the job of designing the bleacher, centred with a state-of-the-art press box. Additionally, the structure would need to be completely accessible for spectators, including ramps and customized seating for those living with disabilities. 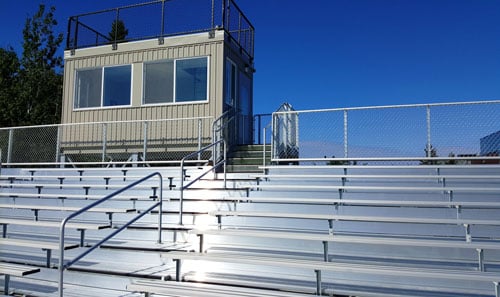 Working closely with our partners at Mitchell Jensen Architects in North Bay, together we were able to craft the perfect seating solution for Nipissing University. Mr. Weinhardt and his team were very thorough and also very accommodating to work with and a team we certainly look forward to working with on future projects.

The team at Mitchell Jensen knew what it wanted in this particular design but also was willing to allow our team to make some suggestions in the overall design of the bleacher and press box to fit the project. Both the available space and budget were important guidelines on this project - a joint effort all the way.

It was decided that the press box would be accessible from the bleacher and we happened to have an existing design that would fit this project.

The fabrication of the bleacher and press box kicked off in early 2018 and the installation followed over the past few weeks. In addition to the seating structures, our team provided some customized soccer team shelters, which now adorn the sidelines of their new field and really complete the project for the school’s athletic department.