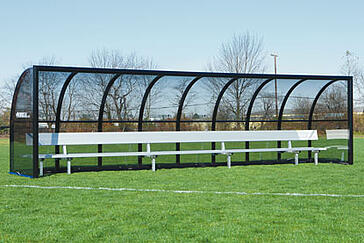 During soccer season, diehard teams will rarely miss a game, rain or shine.  Weather doesn’t keep players from taking to the field - in fact, playing in the rain and mud add another dynamic to gameplay that some players even prefer.

While it might be fun to play soccer in the rain, it’s not always as enjoyable to be on the sidelines in a monsoon.  It is certainly easier to be a good sport about the rain from on the field than it is on from the bench.

Soccer players keep warm and focused by keeping in motion.  But once a player is subbed out, he needs a place to take shelter from the storm and recuperate before returning to the game. Without the chance to dry off and warm up, your players could catch cold and risk missing future games.

Throw a roof over their heads with an Elite Team Shelter from Sport Systems!  Available in custom color options, our soccer sideline shelters complete your pitch by proudly sporting the home team’s colors.

Don’t leave officials out in the cold - we offer staff shelters for referees and bookkeepers as well. The aluminum construction and semi-permanent ground anchoring systems add to the overall portable design, making it a breeze to roll them up to the sideline when the clouds start rolling in.

Request A Quote today to keep your soccer team and staff members out of the weather!