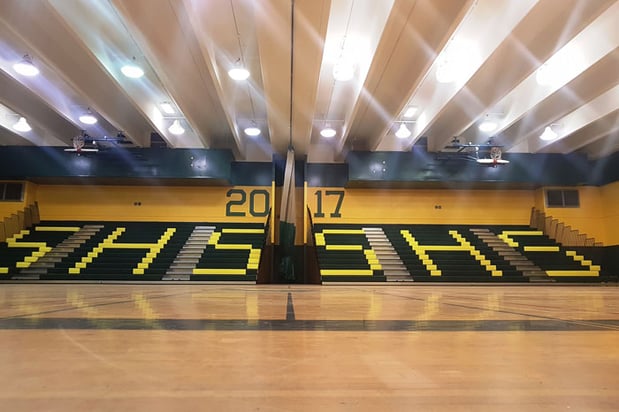 Saint John, New Brunswick was the setting for one of our most recent projects. Our team boarded a plane and headed down to the port city in Canada’s Bay of Fundy, ready to install yet another two banks of retractable seating.

The site was Simonds Secondary School, a member of the Anglophone South School District, with which we have had the pleasure of working with on other occasions.

The large high school, constructed in 1970 at its current location, is home to over 800 students located in the eastern side of Saint John.The facility is comprised of the usual classrooms and lecture halls in many high schools but also features a pool, theatre, weight training facility, pool room, community access centre, technology hub, recording studio, greenhouse and of course, a double-sized gymnasium.

Serving as home to the Seabees, the school’s concentration on athletic prowess is very apparent, encouraging students to excel on both an academic and athletic basis. 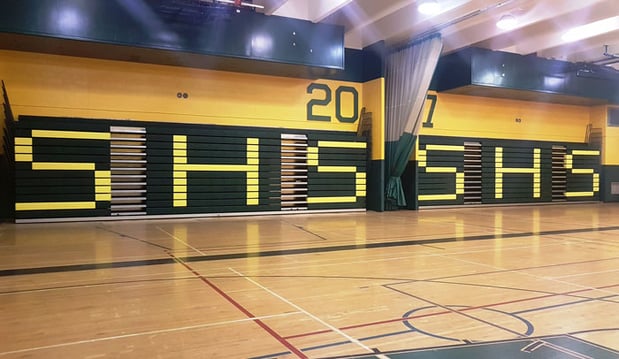 As such, when seeking a partner that would not only help them replace the existing, outdated retractable seating located in the school’s gymnasium, stakeholders were looking for guidance on the right solution for their needs.

After some consultations, it was decided that due to the increasing size of the student body and athletic programming, a rather large seating arrangement would be needed. In assessing the space and size of the facility, our team designed a pair of retractable bleacher banks to be installed on the premises.

Our installation team was on the ground to install the large bleacher system over a 5-day period and given the size of the structures, one of our larger motors was needed to handle the weight of the seating system.

Adding another level of customization, the bleachers were finished in school colours, complete with customized lettering with the initials SHS, leaving no mistake to visiting teams that they were indeed in Seabee territory.