Pickleball: The Sport Taking the World by Storm 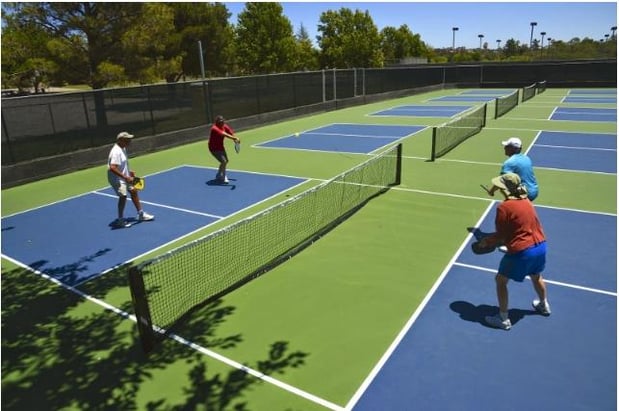 It’s not quite tennis, not quite badminton and not quite ping pong; it’s pickleball and it’s one of the fastest growing activities on the planet. Designed for fun at all ages and skill levels, pickleball utilizes many of the elements found in related racket sports but instead uses a modified ball and paddle.

Created in the American Pacific northwest by a trio of dads, the game was invented to keep their children busy after they grew tired of traditional summer activities. Crafting the original equipment and creating a unique set of rules, the game is now sweeping across Canada and the United States as more Asian and European countries also begin to install custom courts.

Despite the absence of any real pickles, the name of the game was thought to have originated after one of the founders, Joel Pritchard’s dog, named Pickles, would spend most his time chasing stray balls without returning them.

Played in either singles or doubles formats, the game commences with an underhand serve over the custom-sized net in the centre of the court. Points are awarded only to the serving team, which changes each time a fault is committed by the serving team. Much like the game of tennis, the opposing team must allow the ball to bounce once before returning volley.

Typically speaking, games are played to 11 points where the winner must win by a margin of two points.

The court measures the same as a doubles badminton court measuring 20 x 44 feet, with a net height of 36 inches at the side court and 34 inches in the middle. Similar to tennis, the court is broken down into right and left service courts and a seven-foot no-volley zone in front of the net.  This area is referred to by players as the “kitchen”.

If there is already a court and netting system in place, you will only need to acquire the specialized paddle and official pickleball ball. These paddles are sized between a tennis racket and a ping pong paddle and are constructed of high-grade materials such as aluminum and graphite. Similar to a whiffle ball, the balls have holes through them and are designed for both indoor or outdoor play. 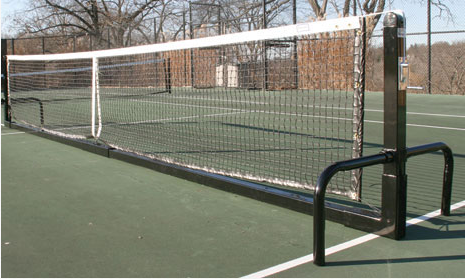 If you are starting from scratch, you will need an existing or newly-constructed court as well as a complete system including posts and net.