The safety of a gym is only as good as the condition and configuration of the equipment inside of it. With a rash of unfortunate incidents over the past decade or so, a large cohort of facilities have been busy assessing and repairing or replacing equipment known to be the root cause a variety of safety hazards inside gymnasiums.

While much of these problems are overhead, such as ceiling-suspended basketball systems, light fixtures, and roof trusses, another large area of concern for operators are outdated dividers and partitions.

Many of these products were installed throughout the 1970s and 1980s and as one can imagine, leaps and bounds have been made in the design and development of such products since.

These existing partitions were often constructed using heavy materials and were rarely equipped with safety mechanisms such as two-key operation and sensors to detect obstructions when opening or closing.

As such, a large portion of what we do is assess the safety of these existing structures, which usually require replacement.

This was the case when we were contacted by key stakeholders from the Ottawa Catholic School Board who were interested in the removal and replacement of existing folding partitions at two schools in the Ottawa area. Our team was deployed on the site of both schools to assess how to best remove these large structures and what to replace them with. 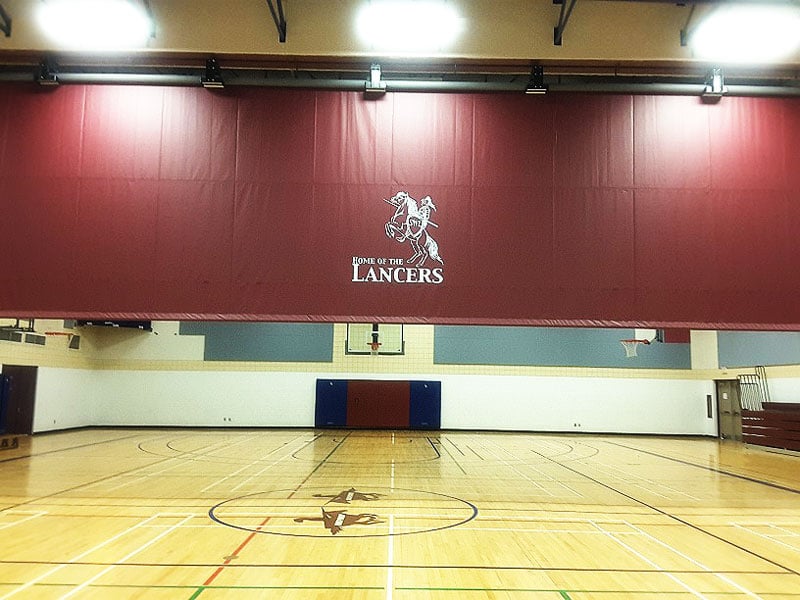 After reviewing the condition of both gymnasiums, we came up with a plan for removal and suggested our popular 4040 top-roll gym divider curtains as replacements. Eliminating the need for belts, cables or straps, these systems are virtually maintenance-free and roll entirely into the ceiling above for a seamless look when retracted.

These two curtains were also chosen to be designed using the school colours and included custom printing of the school’s logos for additional branding and school spirit.