We were connected with key stakeholders at George Brown College in the summer of 2016 when they reached out to us with the interest of revamping their basketball systems and gymnasium facility at their St. James Campus.

All told, there was a total of six basketball systems that were in need of replacement but the facility itself presented some unique logistical challenges, particularly when it came to moving large equipment in and out of the location.

The gymnasium at the St. James campus is situated on the sixth floor of the building, leading college staff to believe that the only entry-point for large equipment such as basketball systems would have to be hoisted by crane and inserted into the building.  In addition to acquiring the necessary permits and crane equipment, the school was told they would also be required to remove a large window to allow the equipment to enter the building, and then have it replaced shortly after the equipment was inside.

Obviously, a situation like this was considered to be less than ideal and the college was interested in other options.  To offer an alternative solution, we turned to our in-house design team to not only design the right systems but to do so in a way that would allow easier entry into the building. 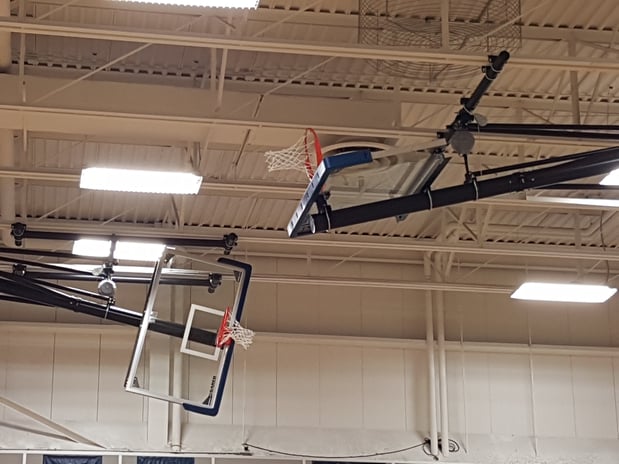 What was ultimately designed were six ceiling-suspended systems that replaced the existing wall-mounted units and ones that would be able to fit inside the elevators thus eliminating the need for a crane and other equipment.

The two main baskets are additionally spectacular as we employed a pair of our new side-folding basketball units that were designed not to encroach on the main volleyball courts while in use.

Once again, we were approached with a unique situation and met the task head on.  Backed by the prowess of our experienced design team, when it comes to customized work and construction, we lead the pack in today’s competitive sports equipment marketplace.