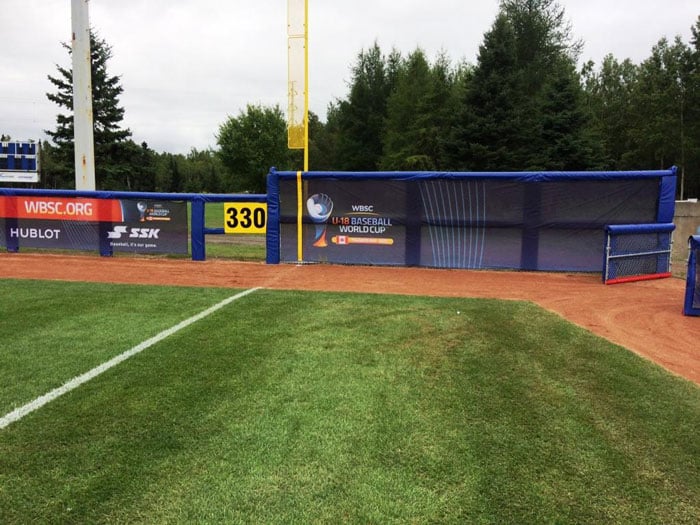 Like any sporting venue, baseball fields hold certain safety standards in order to keep players and spectators safe during games. When it comes to a baseball diamond’s safety standards, certain padding placement is needed to maintain safe gameplay.

Probably one of the most key areas for padding to be placed is along outfield fences. Here, padding on the walls and fences is very much a necessity in order to keep players safe as they chase stray balls.

While the MLB doesn’t yet mandate outfield padding, many agree that they should and most smaller stadiums are already going the extra mile to ensure padding is present. Far too many professionals and amateurs have collided with the outfield fences and been injured as a result of insufficient padding.

As writer Adam Moss wrote, there has been a “history of painful encounters with a non-padded wall in baseball.” When it comes to your stadium, you should see outfield fence padding as an absolute must-have for the sake of your players.

The rails around the dugout are another place that call for extra attention and planning. Similarly to the outfield fences, unpadded rails can lead to painful collisions that could end up seriously injuring a player.

Protective netting is also a requirement here to keep stray balls from hitting a bystander. One important thing to note, however, is that the netting will need to be inspected regularly and replaced when damage occurs.

Most fields utilize netting to protect spectators and bystanders from stray balls throughout the game and know the importance of maintaining them properly. However, it’s surprising how many stadiums are just catching on to the importance of wall padding-- even though wall padding is generally a one-time investment that you won’t need to replace for many years to come.

Ideally, all of the walls and rails that a player could potentially collide with in the heat of a game should be covered with protective padding. Fortunately, you can find a versatile selection of padding tough enough to withstand years of use and weather.

Padding also comes in many different colours, meaning you can tailor it to match your stadium’s colour scheme. For extra cost, you can even find custom padding covers that show off the team’s logo, sponsors, and so on.

Regardless of the appearance, however, you need to make sure the padding is strategically placed for maximum effectiveness. The above mentioned zones should take priority as they are among the most common spots for collision, but you should aim to cover all potential collision hazards with padding.

In doing so, this one-time investment could save players from significant injuries in the future and turn a potentially season-ending event into an encounter they can brush off in the middle of a game without a second thought.