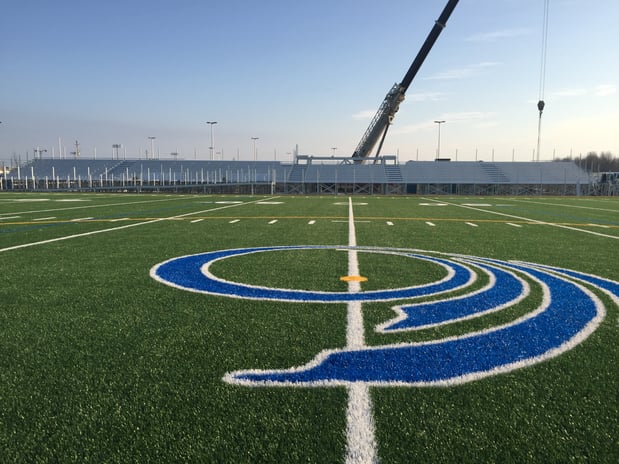 The project envisioned by Cumberland City Councillor Stephen Blais back in 2014 is finally coming to fruition. While the project is not complete at the time of this publication, the park has undergone a variety of construction and site upgrades located in the east end of Ottawa in the Orleans neighbourhood.

Blais spearheaded the unique $8 million park expansion in partnership with local homebuilders who ended up designing and funding the majority of the park. Millennium Park is slated to be the premier destination for sports clubs and casual users in the Orleans area, complete with state-of-the-art facilities and sports fields. Among the upgrades the park will have upon its completion are an artificial turf soccer and football field, stadium seating and lighting, nine full-size soccer fields, a junior-size soccer field, two ultimate Frisbee fields, 400m running track, two shade structures, club house for junior sports clubs, splash pad with both senior and junior play zones along with junior and senior play structures and swing sets.

As part of this development, we were awarded the contract to supply the location with a variety of sports equipment and infrastructure. On the natural grass fields we supplied and installed two pairs of permanent soccer goals along with a pair of mini permanent soccer goals for junior play. We will also be supplying the natural fields with three 5-tier x 15’ long bleacher seating systems for spectator viewing, along with four 15’ long surface mounted players benches on the artificial field

The artificial field is also where we installed a pair of combination football and soccer goals, complete with ground sleeves, along with the largest portion of the project; the grandstand bleacher.

The grandstand bleacher is to allow seating for approximately 1000 spectators and will feature a 42” elevated deck and angle-frame design to allow for supreme sightlines to the field. An accessible ramp was designed into the structure from the concrete slab with custom notched-out accessible seating areas. A customized press box is also part of the project, which will be nestled atop the bleacher structure complete with roof top access for filming capability. The press box measures 8’ x 24’ and encloses three rooms, one for the visiting team, one for the home team and the other for members of the media. The grandstand and press box project were both designed in accordance with the OBC 2012 and AODA requirements.

Plans to complete the grandstand and press box structure are slated to be completed before Christmas, while the remaining equipment yet to be installed, might not be completed until the spring, weather dependent. Stay tuned as we profile the completion of this large-scale project at some point early in 2016.