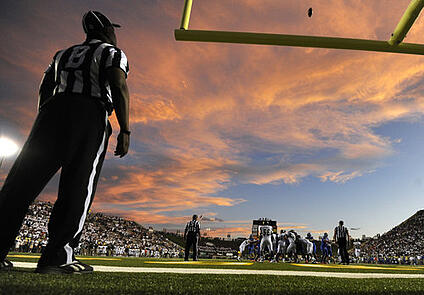 Tom Dempsey holds the record for longest field goal in an NFL game at a whopping 63 yards.

Tom Dempsey only has one and a half feet.

Maybe that half foot gave him a distinct advantage. Perhaps it forced him to train harder than the next guy. Either way, its easy to overlook the efforts of a kicker. Though they often score points when it matters most, they never seem to garner the same respect as a quarterbacks or receiver. Not to mention they're paid way less!

Football goal posts may seem like an afterthought to an outdoor facility. They're just there on the periphery, used only for a single sport and only a few times a game.

Sport Systems offers a couple of options for your field. If space is a concern we found a pretty clever solution in a combination football goal post and soccer goal hybrid setup. Constructed of both 2 and 4 inch square tubing, our durable hybrid unit is sandblasted and powder coated for durability. Mother nature, bring it on!

We offer more traditional football goal posts as well. Our standard football uprights sport a single post design with a 5 foot offset, use O.D. aluminum and steel and come standard with four wind direction flags. They can be set in concrete or attached to a semi-permanent ground sleeve.

Our Fusion Series football goal posts have goose neck offset (the horizontal distance from the cross bar to the base) that is almost double that of the standard goal post. This allows for mobile soccer goals to be placed under the upright during the offseason. Fusion Series goal posts meet ASTM (American Society for Testing and Materials) safety standards and come with a blue protective pad to protect the goal post and players from each other.

Like the standard football goal posts, our Fusion Series can be cemented in a foundation or placed in a ground sleeve.

Both the standard and Fusion Series football goal posts are available in NCAA and NFSHSA (the high school equivalent) specifications. We offer separate models for NCAA regulation fields depending on whether they have grass or artificial turf. Hey, we don't make the rules, but our equipment sure follows them.

Ready to see what Sport Systems can do for your Football Field?  Request a Quote online today.