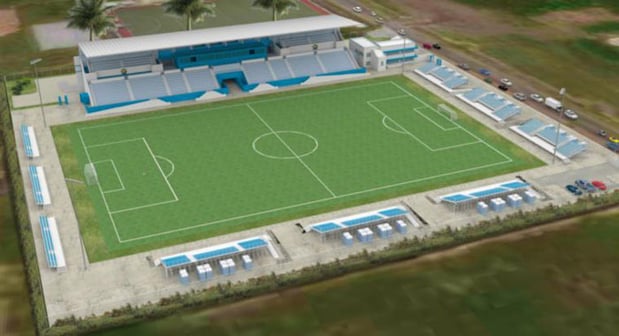 In a project that has been many years in the making, we are proud to announce our joint partnership with FIFA, the Barbados Football Association (BFA), C.O. Williams Construction and Musco Lighting.

The strategic partnership was formed to complete the upgrades to the BFA’s Wildey AstroTurf facility that will give it a completely new look.

Established in 1910, the BFA organizes, promotes and regulates football (soccer) activity on the island of Barbados, catering to over 17,000 players island-wide. Affiliated with the Fédération Internationale de Football Association (FIFA) since 1968, the BFA’s 21-member management team has been working diligently to move this project forward, despite delays.

“The refurbishing of the facility has been in the making for quite a number of years. However, it was delayed for several reasons beyond our control. After the new FIFA president was elected, they went through a restructuring process, and they introduced the Forward [Football Development] Programme, which meant new regulations.” BFA’s general secretary Edwyn Wood told MIDWEEK NATION.

“We also had to get the lease at Wildey extended to a 25-year period. We were at 18 or 19 years, so an amendment had to be done through the Government – which took some time to be approved by Cabinet. Once FIFA was satisfied we met all the requirements, they approved the funding, and here we are now,” he said.

In addition to new lighting to surround the stadium and playing field, our team was commissioned to supply and install the bleacher seating that will soon accommodate over 1,600 fans. Having spent the past few years working closely with officials from both BFA and FIFA, our team is thrilled to officially be involved in this exciting project and will be on the ground in Barbados in the coming weeks to complete preliminary site reviews.

Construction for the process is expected to move quickly as officials are hopeful to have the venue ready for the 2018 season toward the end of December.

“We expect all the work to be completed by the end of December. We really should be starting the new season with lights and bleachers in place, providing we don’t have any further hiccups. However, if the need arises for us to push back the season by a couple of weeks to accommodate the process, then we are prepared to do that.” Wood said.