The Miracle on Ice 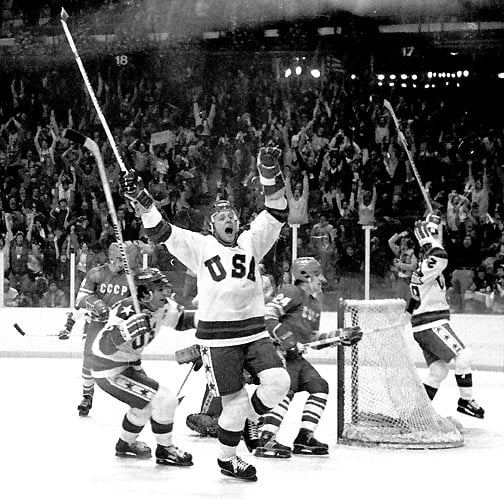 The 2014 Winter Olympics are fast approaching! Opening day is February 7th, and athletes and sports fans alike are counting down the days to the Sochi games. For hockey fans, the winter games bring fond memories of the the US victory over the Soviet Union during the 1980 games. A true underdog story: the game that will be forever known as the Miracle on Ice led the US national hockey team to win legendary Olympic gold that year.

The Soviet Union national hockey team had a reputation. They were the biggest and the best team of players in the world, winning nearly every Olympic gold and world championship since 1954. Everyone expected the same at the 1980 games.

The ragtag assemblage of amateur and collegiate players that comprised the United States national team supplemented their lack of experience with an abundance of spirit. But still, by the time they reached Lake Placid in 1980, it had been 20 years since team USA had last won hockey gold.

Following an inspirational locker room pep-talk from coach Herb Brooks, the US team took the ice to face off against the Soviets. The tight first period ended in a tie, the score 2-2. In the second period, the US team’s all-star goalie, Jim Craig, kept his team above water as the Soviets outshot the United States sixfold. With only one period left to play, the United States trailed 3-2 to the defending champions.

The tides changed in favor of the US around the middle of the third period when they took advantage of a power play scoring opportunity, tying the game at 3. With this goal came a shift in momentum, and USA fired shot after merciless shot on Soviet goal. Then, with exactly 10 minutes left in the game, US right winger Mike Eruzione fired the shot heard ‘round the world. It was ultimately his goal that won the game, against all odds.

Thanks to this defeat over the Soviet national hockey team, the US went on to win gold in the final round of that Olympic tournament. Those young men will be remembered forever for that Miracle on Ice - but they would not have made it without the support of their families, their coach, and their country - and plenty of ice time for practice over the years.

As the countdown continues to the Sochi games and yet another world hockey competition, remember that the members of the next Olympic team could be practicing in your hockey rink right now. Sport Systems  offers the Olympic grade goals and nets they’ll need to be gold medalists - do you believe in miracles?