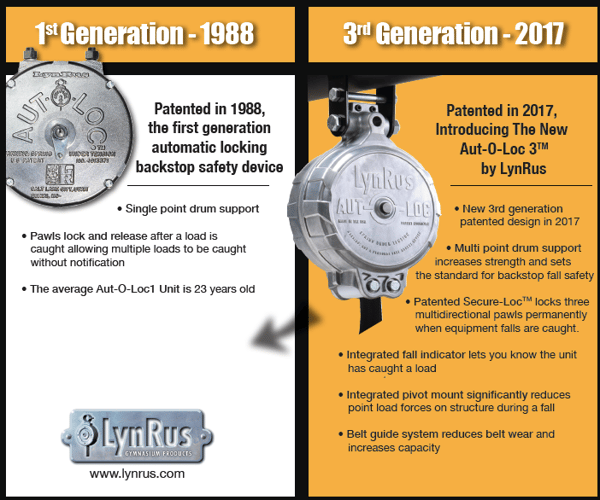 Celebrating over 30 years of gymnasium safety, the revolutionary Aut-O-Loc safety system  has undergone a massive transformation. Since releasing the third generation of their patented technology in 2017, facility owners and operators across Canada and the United States have been taking a second look at their existing Aut-O-Locs and assessing whether or not they are in need of an update.

Without any form of exaggeration, these small yet effective mechanisms are among the most important safety tools found inside your gymnasium. Acting as a fail-safe against sudden malfunction, these systems are used on overhead basketball systems to prevent any overhead systems from falling in the event of a failure.

This safety strap is engineered with safety in mind; this basketball backstop strap operates much like a seatbelt in your vehicle.

The patented inertia plate in all systems can automatically sense a centrifugal force of fall. When sensed, the Aut-O-Loc instantly stops the backstop from falling with its steel pawls and locking teeth located in the housing. This system prevents both damage to the basketball system, as well as any danger to participants and spectators below.

Having prevented countless possible injuries, these systems are used as a backup to cables and other supporting mechanisms.

Going back to the original design patented back in 1988, these systems were centred around a single-point drum support. These original designs changed the industry and quickly became mandatory in schools and other athletic facilities across North America. While the original design’s pawls locked and released after a load was caught, there was no notification of it happening. This has changed with the new design, which features their newly-patented Secure-Loc technology which locks three multidirectional pawls permanently while the integrated fall indicator lets you know the unit has caught a load.

Moving away from the single-point design, the new units feature multipoint-drum support, which increases strength even more than the original generations.

The new model also features a pivot mount and a newly built guide system which both play into the longevity of the units, allowing their lifecycle to extend further than the original.