What Drives Our Gym Divider Curtains 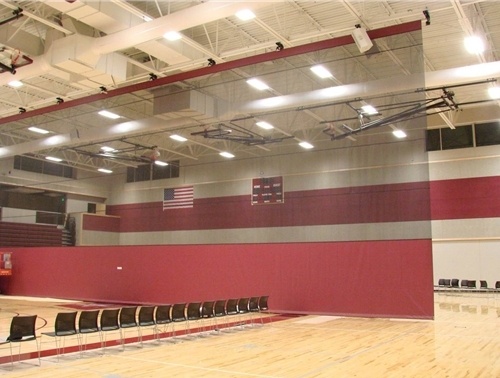 Depending on the intended use and proposed space allowances, our line of gym divider curtains can come equipped in a number of different variations.  As no two facilities alike, the same can be said for our five main gym divider curtain models, each engineered and manufactured to conform to different designs and situations.

Used to safely and effectively separate areas in large spaces such as gymnasiums and other facilities, these curtains are constructed with heavy-duty vinyl and mesh (depending on configuration) and are built to withstand abuse.

What might be more significant than their rugged appearance is the power that safely drives these curtains.  With busy schedules, multiple-use facilities need a curtain that can be either opened or closed within a matter of minutes.  The average height of the majority of school gyms, for example, start at around 25-30 feet so as one can imagine, these curtains require a fair bit of power to move them around.

Our fold-up curtains are all equipped with a powerful curtain hoist that drives a continuous 2-3/8” O.D. drive shaft, lifting the curtain upwards by ways of a 1/8” galvanized aircraft cable.  Powered by a ¾ horsepower, 115-volt gear motor with thermal overload protection, these motors are also found in our peak-fold curtain model as well.

Our internal tubular motors are used to power our top-roll divider curtain, which as the name suggests, rolls from the top of the curtain, storing overhead in the ceiling of the gymnasium.  Curtains weighing up to 325 lbs are easily powered by one of these 120-volt single-phase motors, which boast a maximum torque of 700 inch pounds with a speed of 14 rpm.

These motors are also equipped with an electromagnetic braking system allowing for smooth and accurate stopping with no slippage.  Additionally, they feature a three- stage planetary gear mechanism for quiet and reliable use.

When curtains weigh more than 325 lbs, we include a pair of the tubular motors, as described above for added strength, security and power.  This dual-motor setup is also what equips each of our revolutionary centre-drive curtain models that have the ability to open and close at twice the speed of our other curtains.