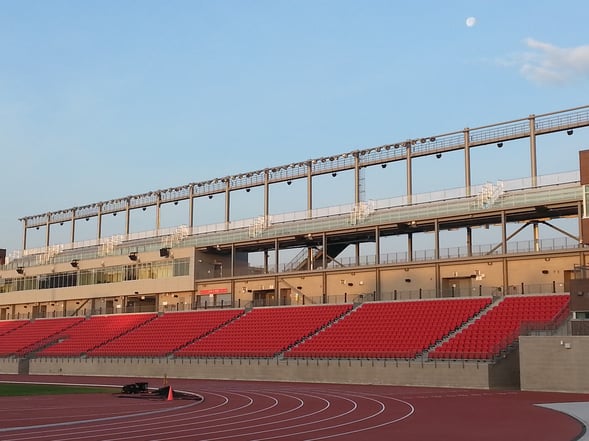 As July quickly approaches, the city of Toronto waits in anticipation for the kick-off of the first international multi-sport event to be held within the province of Ontario in over 85 years. The Pan Am Games are scheduled to take place beginning July 10, 2015, when approximately 7000 athletes will compete in 36 individual sports.

As one can imagine, the preparation for this type of event must begin well in advance and be carefully planned and executed. In the fall of 2014, we were commissioned to design and install retractable barrier netting to be used by the games on the campus of the University of Toronto.

Following the successful completion of this netting project, Sport Systems was once again commissioned by organizers of the games to design and fabricate some intricately customized bleacher seating for the Pan Am Athletic Stadium housed at York University.

When planning any large-scale event, seating is typically a chief concern, especially regarding sporting events. With legions of fans and spectators set to descend upon the city of Toronto this summer, organizers had to ensure they could seat the masses at each and every event location. What made this bleacher seating project so unique was the fact that the seating was to be designed so that it could be installed on the 5th level or roof deck of the stadium.

The final bleacher design ended up featuring a 24” row rise x 30” row spacing with a rise and run combination that was designed to maximize spectator sightlines, ensuring they all satisfy a C Value of 60 or greater. The bleachers also feature customized staircase access from the rear of the bleachers to the deck level for top loading and a galvanized steel picket guardrail system on the sides and rear of the bleachers as well. 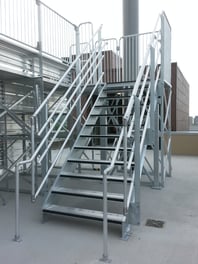 At the slab level of the bleachers, there are now notched out areas for broadcasting cameras at the finish line location and with this in mind, the first row of seating is elevated to allow spectators ample clearance with a clean line of sight over the camera operators.

This large-scale project now can seat 750 spectators, complete with custom-designed bleacher anchors to account for higher than usual wind loads often found on high-level structures like this one.

Upon the completion of the Pan Am Games, our team will be returning to the Pan Am Athletic Stadium to supply and install an additional 800 seats to be located along the headwall at the field level.